The Ciem Webcomic Series is a dramatic pastiche DSHW Machinomic from Dozerfleet Productions, which specializes in playing around with various comic book and drama tropes whilst simultaneously showing off the storyboard capabilities of mixing Photoshop with The Sims 2. The series features the misadventures of the titular Candice "Candi" Marie "Stevens" Flippo-Levens-McArthur / Ciem, a teenage girl in 2019 who finds out that Phaelite aliens mutated her father while he was a baby, which allows her to have centipede powers. From there, she realizes that she is supposed to help her Big, Screwed-Up Family battle their archnemeses: The genocidal Hebbleskin Gang, made up of Meethlite aliens.

Willing to go along with it, albeit on her own terms, she tries to also get into college and manage her love life. Cue several loved ones being killed left and right, several averted apocalypses, and even a few pseudo-governmental conspiracies to turn her and her sisters into Duke Arfaas' trophies, and the Determined Widow becomes more determined than ever to finally settle down. In the meantime, she struggles with doubt, compromise, fear, lack of self-confidence, guilt, wangst, lust, her boyfriend's health problems, and how to help Botan the Plant-Man get his wish.

The trilogy initially began as an Affectionate Parody of the Spider-Man Trilogy, and was a Spin-Off of an obscure comic called The Battle for Gerosha, before becoming an entity all unto itself. Due to its heavy reliance on The Sims and related Game Mods as rendering tools, several tropes from that game are played with and repurposed rather freely.

In spite of coming out around the same time as Starline Hodge's much more popular Candi, the two have nothing to do with each other, in spite of some remarkable similarities

Also, in spite the first story's original subtitle, it has absolutely nothing to do with the Dutch horror film series The Human Centipede. In fact, the realization of them being Similarly Named Works actually resulted in Writer Revolt, where the author of Ciem decided to create an Ultimate Universe in novella form to justify renaming the first story "Ciem: Vigilante Centipede." And while that is in Development Hell, it has still gotten some high marks as a promotional tool for UGO.com, for the fact that nearly every character from the cast can be easily re-created with their HeroMachine software. 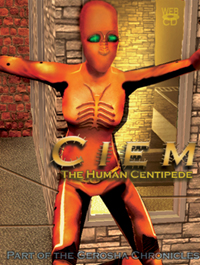 Serving as an origin story, Ciem tells the origins of Candi Levens, an onyro-haired teenage hermit and amateur crimefighter who was born with centipede-themed superpowers and several venomous tentacles (reduced in size to glorified stingers in later versions) that hide inside her arms and legs, called her "centilegs." She is revealed to have a boyfriend, a nearing-retirement superhero named Donte McArthur/Emeraldon. Her sisters reveal to her that her family is more dysfunctional than she originally cared to know.

One afternoon, Candi decides to show up late for a party that her hacker sister Miriam is going to, so she can practice her centi-fu fighting skills and say goodbye to her boyfriend before he goes off to war on an alien planet. She doesn't detain him as long as she would've liked to. But as soon as he leaves, she ends up in a fight to the death with a Not Brainwashed ex-boyfriend from her grade school years, who is working for the genocidal Hebbleskin Gang. She learns that this Meethlite alien gang, led by Duke Arfaas, wants her and her sisters' heads as trophies, in an effort to fight back against an oracle in which a "Gifted One" of the "li Po" would destroy Arfaas' last remaining monsters, signifying the end of the Hebbleskin Gang.

To make a long story short, her boyfriend becomes a prisoner of war and is rumored dead. Her parental-figure sister Erin is brutally murdered, and Miriam is now about to go into hiding. Candi herself has a Heroic BSoD at hearing the news, and moves to a nearby university town to give her life a fresh start. After a few adventures in crimefighting, it becomes obvious that the police are behaving in an unusual manner, and Meethlite activity in the area is increasing. She eventually meets the charming-but-troubled Denny Levens. This man seems to be all too aware of how messed-up the town of Viron really is, and quickly forms an alliance with Candi.

Arfaas and his gang finally decide that their target, the Gifted Flippo, is hiding somewhere in plain sight. Having taken control of the Dirbine Police, they decide to send a monster to do everyone else's dirty work, but have trouble finding the perfect take. They eventually create a metallic shrew costume, complete with an evil AI that will turn the wearer into a Brainwashed killing machine servant. This leads to them abducting Jeraime Malestrom, and turning him into their cyborg's glorified beating heart.

After failing to help an alien experimentation victim named Jeral Cormier, Candi decides to give Denny a chance at dating her. However, the fact that she does so, and the fact that she attends Viron University, led some townsfolk to assume the worst about her. Old enemies begin haunting Candi as visions when she cannot overcome her newfound bad reputation. This culminates in Denny barely surviving an attempt on his life by one of the very same Meethlites that murdered Erin, which causes Candi to feel little sympathy when that Meethlite dies after losing in battle.

Not sure what else to do, Candi and Denny decide to get married. Big mistake! Candi soon learns that after about a month of being pregnant, she's been effectively Brought Down to Normal enough to be unable to protect her new Muggle husband. And that's when Musaran's killing spree escalates! After several more Musaran-related murders leads to both Denny and Angie (Candi's daughter) dying, Candi decides she's had enough, and takes several levels in badass to become an orange-suited freedom fighter.

A Mexican community starts cheering for the great Ciempies that rescued one of their own from a villain who was fond of children, so the news begins calling her "Ciem." Candi then learns that her original boyfriend Donte might still be alive, and decides that part of her quest to save her hometown must involve saving Donte from impending doom.

This story has been spread around on CD's at some colleges and wherever else it could be spread while the author waited for an opportunity to publish it online in its original format. It is therefore one of the most aggressive comics pushing for mainstream acceptance of the DVD-Storybook Hybrid Webcomic Format

. It is also in forum syndication on a few Internet forums, such as The Dozerfleet Forum

and Mod The Sims Social

Ironically, its Comprehensive Gerosha novel series will not be an aggressive push for DSHW Machinomics. However, the original webcomic may receive a remake in the future that replaces the Classic Gerosha continuity with the newly reconstructed tale. 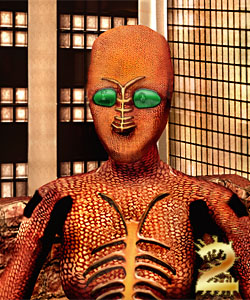 In the sequel, Donte is broke and can't seem to get a job. Candi takes pity on him, and after the couple succumb to their sexual desires a few times, Candi begins questioning why they haven't married yet. Donte also reveals that he promised a friend that if that friend and his wife both died, he'd adopt their son. But a pesky gay couple that's stalking Donte won't let that happen, and the judge will only rule in Candi and Donte's favor if they agree to marry.

But not so fast! While Candi and Donte are figuring out the future of their relationship, Candi's sister Miriam finds herself thrust into a ridiculous Government Conspiracy that involves several close calls with Chinese government agents and terrorists. Donte, now battling cancer, must go to Ploribus for treatment and leave Candi behind to deal with all her life's problems alone. She soon finds herself playing bodyguard to Miriam, while all Hell breaks loose in Dirbine.

Adding to the complications the two sisters face is Miriam's old seafarer friend Simon Aardvonius, who's been turned into the megalomaniacal, termite-lusting Captain Aardwulf by the Hebbleskin Gang as punishment for not keeping up with extortion payments. Capp Aard sets his sights on creating a "Termite Farm Empire" to satisfy his never-ending desire to eat termites. To do that, he reasons he has to steal as many precious jewels as possible and ransom them. Who better for the job than Playful Hacker Miriam "Sniperbadger" Flippo?

Then, the radioactive Ming-Yo gets loose in Dirbine, with a sexy CIA agent battling everything in her path to get to it first. Having problems with her powers, Candi suspects she may be pregnant again. Miriam confirms that she is also pregnant, with twins. With the world stacked against them, the two sisters must band together for safety. But can they rebuild their lives and redeem themselves from their past indiscretions? 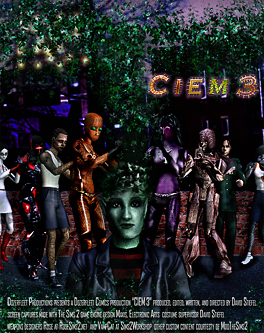 By Ciem 3, Candi and Donte are happily married. They aren't as rich as they used to be, but at least things are looking up. Candi is now done with her schooling at Viron University. The couple is planning to move to Kentucky eventually. They finally have two children, Charlie (adopted) and Frank (the result of their indiscretions in Ciem 2.) Candi has taken up a job at a bar since Donte still can't find work. Ciem is popular with the public. Duke Arfaas' death has recently become public knowledge.

Several of Candi's surviving old enemies band together to seek the ultimate vengeance against her. A ninja named Kimiyato "Milp" Hiriyama tries unsuccessfully to frame Candi for child abuse, and then goes One-Winged Angel on Dirbine after Candi is captured by the same ex-government conspirator that originally made life so difficult for Miriam. Having risen through the Meethlite ranks quickly, the insane Lloyd Kolumn traps Candi and several other Supers in a dungeon the Meethlites built along the California coastline. Candi is sentenced to death by beheading, and forced to wait a week and a half to march to her own death. A bracelet she is forced to wear lies to her body and tells her she is pregnant, so her body stops having powers that work consistently. Reluctantly resigned to her fate, she begins assuming a motherly role to her more traumatized cell mates, who are sentenced to be drowned when the facility is to be deliberately flooded on Candi's assigned execution date.

Ploribus, out of youth formula and fearing the Reaper, decides to to nothing. Dolly gets fed up with this, and steals a suit from Ploribus that was in-turn stolen from the Meethlites. She uses it to become The Earwig, and do the jobs that nobody else seems willing to: 1) Rescue Candi and 2) fight Candi's enemies in Candi's absence. It soon becomes obvious to Dolly, however, that her new suit's helmet is slowly driving her insane with its Ax-Crazy proclivities. She resolves to use its power to rescue Candi before she loses her soul to it.

This leads to several violent escapades, and narrow escapes from death by almost every heroic character not in the shelter of Ploribus' underground base. Afterwards, it culminates in an enormous battle, where Candi, Dolly, Charlotte, and Kyle must fight Kimi for the soul of Jeral Cormier / Botan, and the future of Dirbine.