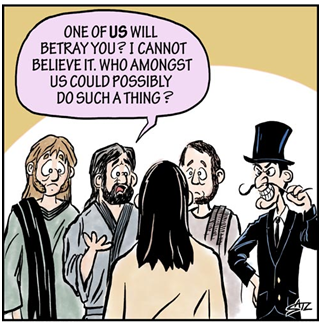 . Used with permission.
Dennis: Hey, it's nice to meet you!
Lysanderoth: [wearing a monocle and sporting a moustache] This world is imperfect...
Dennis: What?
Lysanderoth: If only I could wipe away the impurities...
Dennis: [in disbelief] Is anybody else listening to this?
Lysanderoth: ...and make it as beautiful as me!
— ProZD, "when you start a new game and you meet the character you know is going to betray you

A Face–Heel Turn or Evil All Along reveal that was obviously coming.

This character is supposedly one of the good guys, but they have a certain air about them. You just know that they'll eventually betray the group in some way or another, even though the writer has shown no evidence that they plan to actually do evil (rather than just look evil).

So why suspect them? They express traits that seem Obviously Evil; perhaps they speak in a Creepy Monotone and wear an Ominous Opera Cape, or they have white hair that makes them look a bit too much like Sephiroth, or they constantly go on monologues about how the world is imperfect and corrupt and needs to be cleansed of its impurity, or they wear Scary Shiny Glasses, or their name is something like "Mordred M. McTraitor" that makes them sound like a Card-Carrying Villain, or they have way too much of a resemblance to that mysterious masked villain who menaces the heroes and are clearly the same person with a Paper-Thin Disguise that the heroes somehow don't see through, or they just look like a Dastardly Whiplash. When they finally betray the heroes, you say, "I Knew It!"

The writers may have intended the audience to feel uneasy about Mx. Suspicious and anticipate a betrayal, creating a sense of suspense. However, Obviously Evil character traits are not the best way of accomplishing that goal.

This trope is an Audience Reaction, because the other protagonists suspect nothing. This trope can also happen in-universe if a character predicts a betrayal, but doesn't warn the good guys. This trope can become The Un-Twist, if the audience thinks (by mistake) that the character can't be/turn evil, because it would be too obvious. It can overlap with Narrowed It Down to the Guy I Recognize, if one protagonist's actor usually plays evil characters.

Often can come across as rather insulting. However, Tropes Are Not Bad: occasionally this trope can intentionally be used as a Red Herring, such as when the obvious traitor turns out to be The Dragon to a not-so-obvious one. Sometimes, the surprise is not that Mx. Suspicious turns out to be evil, but how evil they are when they reveal their true colors.

A Sub-Trope of Captain Obvious Reveal. Related to Devil in Plain Sight, though this requires that a character is deliberately portrayed as obviously untrustworthy and that another character picks up on this. Contrast Never the Obvious Suspect and Red Herring Mole.

Do not add an example until the work has the character commit the betrayal. The audience might see an Obvious Judas where the author did not intend one. It would be stupid to list someone as an Obvious Judas, only to reach the end of the story and find that the character never became a Judas, and Speculative Troping is not allowed. Examples for characters who aren't evil yet belong in Wild Mass Guessing.

Also beware of hindsight: anyone can predict a Face–Heel Turn after it already happened. This trope only counts if the character seemed evil back when he or she was outwardly good. Judas Iscariot doesn't fit this trope in The Bible (though he did betray Jesus), but Judas might fit this trope in newer works that retell biblical events, and other characters might fit this trope if the audience sees an allusion to Judas. If a betrayal becomes too widely known to be a twist in newer adaptations, that is It Was His Sled.

THERE ARE SPOILERS AHEAD... but considering what the trope is about, they're pretty obvious ones.

Caddicarus points out how narratively obvious it is that Vladek betrays the king in this LEGO game.

Caddicarus points out how narratively obvious it is that Vladek betrays the king in this LEGO game.