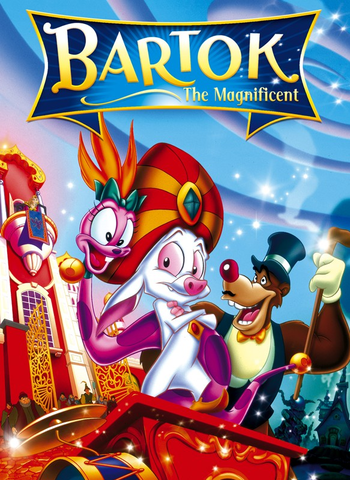 Bartok the Magnificent is a 1999 Direct to Video semi-prequel to Don Bluth's Anastasia. This film is interesting for a couple of reasons:
Advertisement:

The plot follows Bartok as a traveling entertainer and conman traveling Russia with a bear named Zozi, pretending to be a great hero and adventurer. His facade as a hero backfires when Tsarviech Ivan Romanov disappears, kidnapped by the mysterious Baba Yaga. Ludmilla, Ivan's advisor, hires Bartok to get him back, and the bat finds he can't say no. So the pair set off, and Bartok might become a hero yet.

Has nothing to do with the composer Béla Bartók.