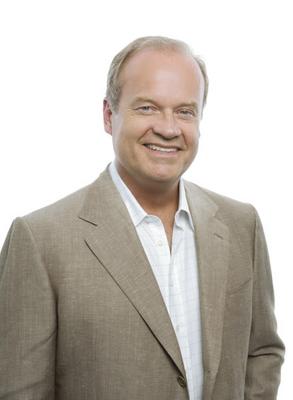 Allen Kelsey Grammer (born February 21, 1955) is an American actor, most famous for his 20-year stint playing Dr. Frasier Crane on Cheers and Frasier (he used to hold the record for the longest duration of portraying a character on TV, tied with James Arness for Gunsmoke, not counting voice actors). One of the few, if not the only, actors to receive three different Emmy nominations for the same character on three different shows (Frasier, Cheers, Wings).

His second-most famous role is that of Sideshow Bob (Krusty's former sideshow partner who tried to frame Krusty for armed robbery, but now plots to murder Bart after Bart proved that Krusty is innocent) on The Simpsons.

Escaping the shadow of Frasier Crane has been pretty hard going (see Chuck Darling in the short-lived Back To You), but Grammer has proven his versatility in other genres, onstage and off. He has played Beast in X-Men: The Last Stand (plus a cameo in X-Men: Days of Future Past), Georges in La Cage aux folles (for which he was nominated for a Tony), and Anti-Frasier Tom Kane in Boss, which netted him a Golden Globe award in the drama category, adding to the many comedy awards he received for his role as Frasier. He also starred in Down Periscope, Swing Vote, Like Father and executive produced shows such as Girlfriends, The Game (2006) and Medium. He also has distinguished himself in Western Animation with an Emmy Award-winning role playing Blinkus in the acclaimed Dreamworks Animation / Netflix series, Trollhunters and played Stinky Pete in Toy Story 2 and Hunter in Storks.

He has had numerous problems with alcohol, having started drinking at age nine (but his family life has been so tragic it's hard to blame himnote  His parents divorced when he was two-years-old, and he and his younger sister Karen were raised by his maternal grandparents until his grandfather's death. When he was 13, his father was murdered; seven years later, Karen was abducted, raped, and murdered after finishing her shift at a Red Lobster in Colorado. He also had twin half-brothers from his father's second marriage who were killed in a diving accident. Outside of his family tragedies, his friend and Frasier producer David Angell was on American Airlines Flight 11 when it was hijacked and flown into the World Trade Center on 9/11.). His daughter is Spencer Grammer. He also once flipped a Dodge Viper. Lest we forget that he was Gary the Rat, and appeared in both of Don Bluth's Anastasia adaptations.

A self-admitted "former Beach Bum from Florida". Known to be a Republican, and really smart (just take a look at his forehead).

Grammer is also a very talented singer, and frequently acts as The Cast Showoff on The Simpsons.