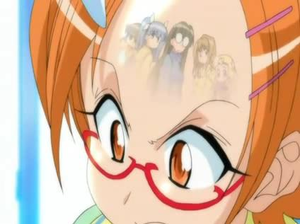 This Space for Rent
Ruth Adams: Did you notice this peculiar indentation in both their foreheads?
Tom Servo: (sarcastic) NO!
— Mystery Science Theater 3000: The Movie
Advertisement:

Many animated shows, especially Japanese ones, have a habit of giving a character (sometimes more than one) an over-sized forehead. For some reason, the character, even if their head is their Berserk Button, will always have it prominently displayed. Especially if it is a visual indicator of their hard-headedness, figuratively or literally. It will often be drawn as exaggeratedly shiny and, like cue ball characters, a common gag is to have others be literally blinded by the glare reflecting off their dome. This type of forehead could also be emphasized with the right hairstyle. Compare the less realistic My Brain Is Big.