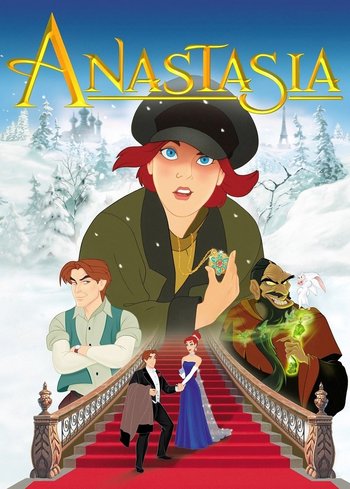 "Although the Czar did not survive, one daughter might be still alive..."
"One step at a time,
One hope, then another,
Who knows where this road may go
Back to who I was,
On to find my future
Things my heart still needs to know!
Yes, let this be a sign!
Let this road be mine!
Let it lead me to my past
Courage, see me through;
Heart, I'm trusting you
To bring me home...
At last! "
— "Journey to the Past"
Advertisement:

Anastasia is Don Bluth's 1997 very loose adaptation of a 1956 film, which itself was already very, very loosely based on the 'life' of the Grand Duchess Anastasia of Russia. It was produced by Fox Animation Studios, and the screenplay was written by Susan Gauthier, Bruce Graham, Bob Tzudiker, and Noni White.

In 1916, the Romanov family's 300-year reign is ended after they were cursed by the evil Rasputin (Christopher Lloyd) and their people revolted against them thanks to his demonic influence. All of the Romanovs apparently died in the attack except the Dowager Empress Marie Feodorovna Romanova (Angela Lansbury), the Czar's mother, who escaped the palace with one of the Czar's daughters, the eight-year-old Anastasia, thanks to the help of a young kitchen boy. Rasputin dies trying to pursue them, but Anastasia and Marie are separated when the young girl falls from a train and (presumably) dies.

Ten years later (1926), Anya (Meg Ryan), an eighteen-year-old orphan making her way in the world, decides to head for Paris. She hopes to find her family there, guided by the message "Together in Paris" inscribed on the necklace she was found with in an amnesiac state as a child. Lacking the appropriate travel papers, she locates a young forger called Dimitri (John Cusack) and his partner Vladimir (Kelsey Grammer) in the old palace. For his part, Dimitri is planning on running a con; rumor has it that Anastasia may have survived the attack, and the Dowager Empress has offered a huge reward to anyone who can reunite Anastasia with her. Dimitri and Vlad notice that this young woman who has come to them for travel papers looks strikingly like an older Anastasia. The two men put to Anya the idea that she may actually be the Grand Dutchess without mentioning that they are seeking a reward.

In the meantime, Rasputin is in limbo until all the Romanovs are dead. His animal sidekick, a bat named Bartok (Hank Azaria), is pulled into limbo by Rasputin's mystic relic, which confirms that Anya is Anastasia. As Dimitri and Vlad travel to Paris with Anya and teach her how to act like a royal, they must also avoid Rasputin calling upon the power of hell to try to kill her.

Got a Direct to Video spin-off in the form of Bartok the Magnificent, though all it has in common with the first movie is... Bartok. It's important to note that this is the only movie sequel that Bluth has ever been involved with.

For tropes specific to the 2017 Broadway musical adaptation of this film, see Anastasia.