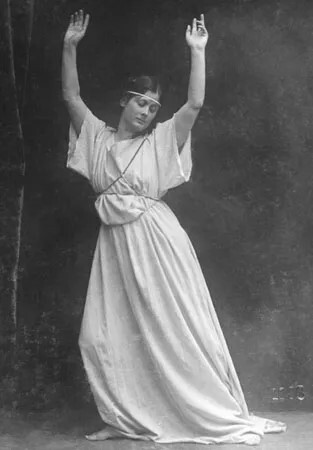 Angela Isadora Duncan, better known as Isadora Duncan, (May 26, 1877note That is the date in her baptismal records, but her birthdate is often given as May 27, 1878.-September 14, 1927), was an American dancer. She was born and raised in California as the youngest of four children.

For Duncan, dance was the most ancient of arts. She rejected the conventions of classical ballet such as the short feather tutus and the pointe shoes. Instead, she wore flowing gowns, bare feet, and unbound hair.

Her life was full of tragic events. Two of her children died by drowning; another one died just months after his birth.

The manner of her death in Nice, France, is well-known. On that day, she wore a long, flowing scarf around her neck while riding as a passenger in a car. Her scarf became entangled with the spokes of the wheels and axle, pulling her from the car and breaking her neck.