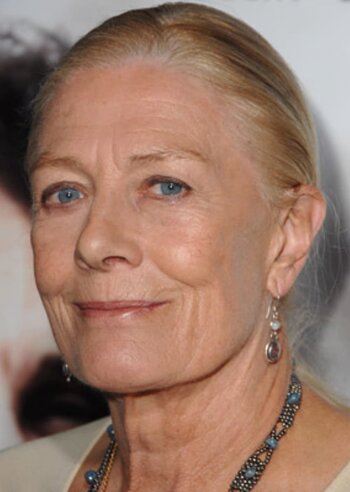 "You can't do what you've been asked to do unless you do the best you can. And roughly speaking, the best you can do is to be very available as a character and actor to the people you're acting with. That's equally important, whether the camera's on the other person or on you."
Advertisement:

Dame Vanessa Redgrave DBE (born 30 January 1937 in Blackheath, London) is an English actor of stage, screen and television, as well as a political activist. She's well-known over her membership in the far-left Workers' Revolutionary Party and her advocacy of a purist Trotskyism. This was often mercilessly parodied by satirists, but it was noted this did not make her difficult to work with and she was always professional in her acting, having enough of a sense of humour to, for instance, appear as a guest with Morecambe and Wise. Vanessa stood for Parliament several times, unsuccessfully, on a WRP ticket. note  the Workers' Revolutionary Party was derided for the sheer number of prominent film, theatre and TV actors it attracted to what was otherwise a dour and Trotskyist far-left party. For this reason it was dubbed The West End Revolutionary Party - "no workers as such, just actors". The acronym "TWERP" was noted; The Goodies played on this and chose to portray Vanessa as a far-left mirror image of Margaret Thatcher. She has been vocal in advocating for the Palestinians (including the PLO, which stirred great controversy), along with refugees generally, criticizing the War on Terror and human rights violations committed by her native UK along with the US.

Born to British actors Sir Michael Redgrave and Rachel Kempson, and part of a distinguished acting family, she is the sister of actors Lynn Redgrave and Corin Redgrave, the aunt of Jemma Redgravenote through her brother Corin, and the mother of Natasha Richardson, Joely Richardson and Carlo Nero.

Appearances with pages on this wiki: