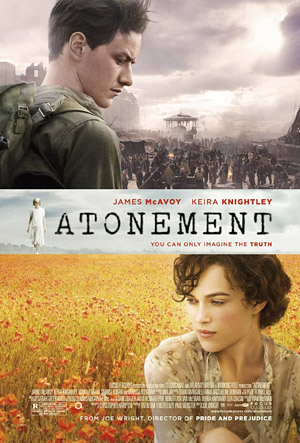 The novel Atonement was adapted into a 2007 film of the same name, directed by Joe Wright and based on a screenplay by Christopher Hampton, starring James McAvoy and Keira Knightley.

Like the novel, the film follows a pair of Star-Crossed Lovers: the wealthy young lady Cecilia (Knightley) and the family's housekeeper's son Robbie (McAvoy) in antebellum England, who are torn apart when Robbie is arrested following a misunderstanding by Cecilia's jealous younger sister Briony (Saoirse Ronan as a child, Romola Garai as a young adult, and Vanessa Redgrave as an old woman). As the country becomes more and more strained by World War II, Briony tries to make amends.

Distributed worldwide by Universal Studios, with minor releases through other divisions, it was released in the United Kingdom and Ireland on September 7, 2007, and in North America on December 7, 2007. The film opened the 64th Venice International Film Festival, making Wright, at the age of thirty-five, the youngest director ever to open the event. The film also opened the 2007 Vancouver International Film Festival.