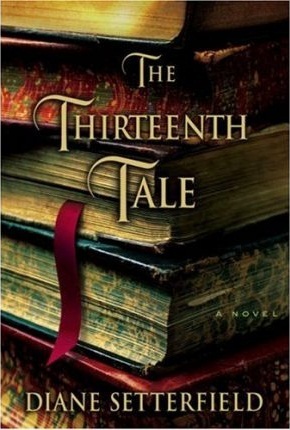 Once upon a time, there were twins.
"All children mythologize their birth. It is a universal trait. You want to know someone? Heart, mind and soul? Ask him to tell you about when he was born. What you get won't be the truth: it will be a story. And nothing is more telling than a story."
— Vida Winter
Advertisement:

The Thirteenth Tale is a 2006 novel written by Diane Setterfield. The story is about Margaret Lea, an unassuming young biographer who lives with her bookstore owner father. One day she receives a letter from Vida Winter, one of the most prolific and well loved writers alive. Vida Winter has spent all of her public life inventing various stories about her past, but she's close to death, and has chosen Margaret to write the true story of her youth. Margaret has never read any of her books before, and so initially decides to turn her offer down, but after reading some of Vida Winter's books, reconsiders.

What follows is a story of incest, of child abuse and neglect, of a once rich and prosperous family slowly decaying, and the story of two twin girls: Adeline and Emmeline. Margaret becomes entranced by her tale, but finds that as the story is told the truth about Vida Winter's past becomes more and more shrouded in mystery.

The book was adapted into a film in 2013, starring Olivia Colman as Margaret and Vanessa Redgrave as Vida. Sophie Turner and Antonia Clarke played Adeline and Emmeline.