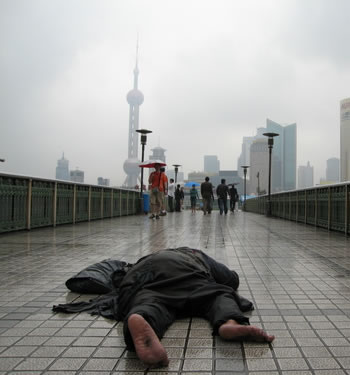 Oh, look outside the window, there's a woman being grabbed
They've dragged her to the bushes and now she's being stabbed
Maybe we should call the cops and try to stop the pain
But Monopoly is so much fun, I'd hate to blow the game
— Phil Ochs, "Outside of a Small Circle of Friends"
Advertisement:

Citizens that are either reallllly pessimistic or really apathetic.

The Empire taking over the world? Giant meteor in the sky? Evil vampire slaughtering people? Clownish madman destroying the world? Eldritch Abomination awakening? They don't care. It's somebody else's problem. It doesn't even seem to faze them beyond the occasional "Wow, that's a big rock in the sky." Sure, occasionally the mayor will ask you to save their town, but that's as much concern as they express. The shopkeepers might sell you the supplies you need to rescue them, but they'll charge full price, because there's No Hero Discount. It's Up to You.

They'll just shuffle around, minding their own business, While Rome Burns.

In a film where cities are destroyed, this trope runs as rampant as the disasters themselves. No matter how many warnings the populace has, no matter if there have been fissures opening in the streets for days or giant alien spaceships hovering overhead, there are always a huge number of people who are just there to stare in disbelief right before being obliterated. Unfortunately, this has more than a little Truth in Television. The trope is justified here because seeing an empty city trashed is not as emotional as knowing millions are dying.

Expect these to be one of the everyday inhabitants of a Dystopia or Crapsack World, to highlight the psychological despair of the setting. Justified in these kinds of settings, since the immutability of their misery have made them experience the in-universe equivalent of Too Bleak, Stopped Caring. Dystopian governments also prefer Apathetic Citizens because they gave up rebelling, and might try to deliberately invoke this trope through Bread and Circuses.

This is also used poetically (mostly in fantasy) in making the statement that magical events and miracles takes place all the time and all around us, and people are just too busy, or too distracted to see it. But in extreme fantasy it could be that the citizens ignore the flying horse, disappearing church, or whatever the event, because it is a common-place occurrence in that world. If the apathetic citizen is working as a cashier or store clerk, then it's Apathetic Clerk.

The parable of the Good Samaritan makes this trope Older Than Feudalism, although it is of course averted within the story.

No One Cares About Good Deeds

Even after Judy and Ham exposes Momma and Poppa's nasty food practice to Lone Moose in their local newspaper, the citizens don't care they're eating reused, rinsed noodles and continues to eat there, including Wolf.

No One Cares About Good Deeds

Even after Judy and Ham exposes Momma and Poppa's nasty food practice to Lone Moose in their local newspaper, the citizens don't care they're eating reused, rinsed noodles and continues to eat there, including Wolf.