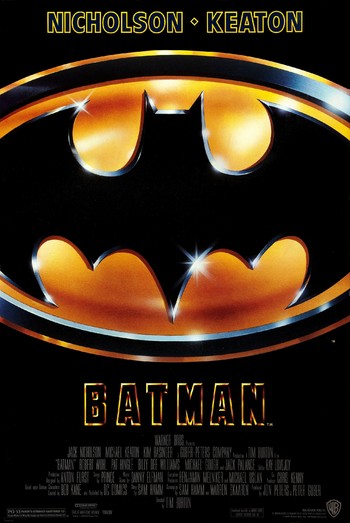 Only one will claim the night.
Batman: I'm not going to kill you. I want you to do me a favor: I want you to tell all your friends about me.
Thug: WHAT ARE YOU?!
Batman: ...I'm Batman.
Advertisement:

Tim Burton's blockbuster film about the eponymous superhero that took the world by storm in 1989 and started the Batman film series. It also arguably set the template for the discourse around modern big budget superhero films.

Billionaire Bruce Wayne (Michael Keaton) has been fighting crime in Gotham City as Batman for some time when this film starts, but is an enigma to a city unsure of both what he is and whether he even actually exists or if he's just an urban legend. The plot here chronicles his battles with Jack Napier (Jack Nicholson), a mob enforcer who went insane after falling in a vat of chemicals and terrorizes Gotham as The Joker.

An Academy Award deservedly went to Anton Furst's amazing set design, which was partly inspired by Brazil and Metropolis, and became just as influential as those films in dystopic set design.

Batman also revolutionized the home video industry — it was the first financially successful film to be released for the home market the same year as its theatrical release and for only $19.99. It became a stocking stuffer in many homes that Christmas and went on to earn $150 million on home video alone. Now, even blockbuster hits are released in home video as soon as their theatrical runs are over (sometimes even before they end).

See also Batman: The Animated Series, which took some cues from the Burton films and actually launched the same year as Returns, and went on to produce a few movies of its own. The notorious Catwoman (2004) film in 2004 has no continuity connection with these,note a picture of the Returns version of Catwoman appears in the film as the past bearers of the mantle of Catwoman are discussed, though but it's worth noting that the whole idea of doing a film about her alone was inspired by Michelle Pfeiffer's performance in '92.

Not to be confused with Batman: The Movie based on the Television Series with Adam West.

The universe of this film was featured in Crisis on Infinite Earths (2019) as Earth-89, with a cameo by Robert Wuhl as Alexander Knox. Michael Keaton will return to play this version of Batman once again in the upcoming The Flash movie set in the DC Extended Universe, which will focus on The Multiverse.

DC started publishing a Batman '89 series in 2021, featuring the continuing adventures of the versions of the characters as seen post-Returns, while ignoring Forever & Batman & Robin.