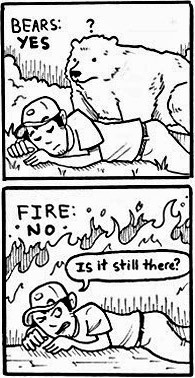 A small-scale exchange of fire has just taken place. The bad guys see one of the heroes lying on the ground, apparently dead, with a sword or whatever sticking out of them.

They approach the apparent corpse, or corpse is brought to them via The Body Bag Trick. As they stand over them, the "corpse" opens their eyes. And beats them up.

In Real Life, this is a war crime and has been since at least 1948. The Laws and Customs of War state that those soldiers that are hors de combat ("out of the fight") a category that includes prisoners, the severely wounded, sailors abandoning ship, the dead and ejecting aircrew — although not paratroopers — are not to be attacked. Feigning that status is perfidy and highly illegal, since it would lead to the other side killing the genuinely wounded on the spot (which is a war crime too) to make sure.note Modern weapons can make survivors look dead, so examination of the apparently dead is mandatory where practicable Of course, fictionally (and non-fictionally), you're often up against people who aren't signatories to the Geneva Conventions... That said, provided that you don't initiate attack, playing dead until your enemy goes away is not a war crime.

Playing dead in Real Life does have its perks in specific situations. When being confronted by certain animals, like bears, who are hardwired to mostly take interest in prey that look alive and kicking, if you can pull it off long enough the animal in question will most likely leave your body alone, giving you a chance to escapenote then again, bears and other opportunistic predators will also eat corpses so long as they smell reasonably fresh, so Do Not Try This at Home.

Note that Playing Possum is a phrase inspired by the Virginia opossum (colloquially, many American dialects drop the first "o" from the name when spoken, hence the term), which famously feigns death and produces a rotting smell. Australian possums (which are named after the Virginia opossum) are not noted for employing this strategy. Unfortunately for the opossum, this response to danger is involuntary and often leaves it incapacitated in a dangerous situation.

Subtrope of Faking the Dead. Buried in a Pile of Corpses is a specific sub-trope. See also I Surrender, Suckers. Compare Defensive Feint Trap and Sick Captive Scam, in which a captive pretends to be hurt or ill rather than dead to get the drop on his captor. Contrast Finger-Twitching Revival and Of Corpse He's Alive. Not to be confused with Dead Person Impersonation. May involve a Mistaken Death Confirmation depending on the circumstances.

Blu and Jewel play dead in order to try and escape the poachers. The plan fails however due to Blu not being able to fly and Jewel getting caught by Nigel the main antagonist of the film.

Blu and Jewel play dead in order to try and escape the poachers. The plan fails however due to Blu not being able to fly and Jewel getting caught by Nigel the main antagonist of the film.