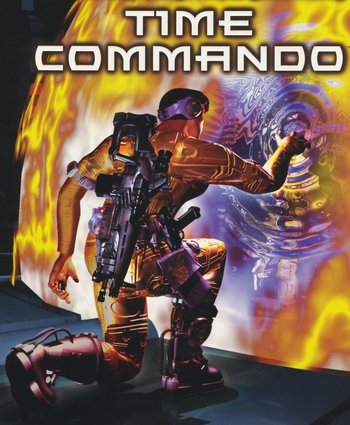 Fight your way through time. Or you're history.
Advertisement:

The military are training their soldiers with a program that can mimic any combat from any time period.

A man puts a predator virus into the system, creating a time vortex that threatens to consume the world.

Enter Stanley Opar, a S.A.V.E (Special Action for Virus Elimination) operative to get rid of the virus. But this virus might be more than he can handle...

Time Commando is a 1996 action-adventure game for the PlayStation, Sega Saturn and PC, developed by Adeline Software and published by Electronic Arts, Activision and Virgin Interactive during several years. It is available on GOG

and FINALLY on Steam.

Notable for the MANY different enemies and attack varieties (at least 6 per level, including bare fists), and allowing the player to bring down a tank with simple weapons.