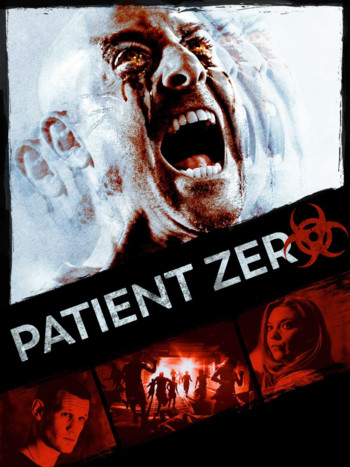 Patient Zero is a Horror Movie by Stefan Ruzowitzky.

A strain of rabies that began in dogs has managed to jump species to humans. A strain whose rapid spread was aided by its mere 90 second infection to transformation time. In the end 7 billion humans are either dead, or infected.

In an underground bunker in an undisclosed location, a few remnants of humanity have taken shelter with the help of what now remains of the military. They've been capturing infected and interrogating them in hopes of finding patient zero, the first person ever to have this new strain, in the hopes of synthesizing a cure from their blood. Now, normally, interrogating an infected isn't doable, since infection seems to have reduced their language to feral growling and shrieking. The trick is that all of the infected are interrogated by Morgan (Matt Smith), a man who was bitten during the initial outbreak, but didn't turn. The bite DID however, allow him the ability to communicate with the infected.

So, with Morgan's help, the military scientist Dr. Gina Rose (Natalie Dormer) is trying to narrow down the location of where patient zero might be. However, things get complicated when an unusually intelligent infected (Stanley Tucci) is found and brought into the bunker.