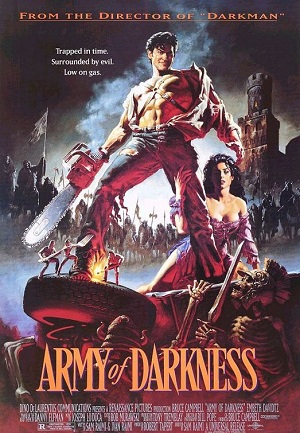 "All right, you primitive screwheads! Listen up!"
"Hail to the king, baby."
—Ash Williams
Advertisement:

Army of Darkness is the 1992 sequel to Evil Dead 2 and the third film in the Evil Dead franchise. It is directed by Sam Raimi, who co-wrote the screenplay with his brother Ivan Raimi. It was released on February 19th, 1993.

Ash Williams (Bruce Campbell) is transported back to Medieval Europe, where he finds out he can return to his own time if he can retrieve the Necronomicon. Ash manages to find the book, but when he inevitably screws up the retrieval, he's forced to train and help the not-so-peaceful villagers he's placed in the path of an Army of Darkness.

Noticeably Denser and Wackier and largely Lighter and Softer than the previous two movies, Army of Darkness eschews the Horror Comedy of previous entries in favor of being an out-and-out slapstick comedy that's relatively tame in content. Due to this making it easier to broadcast on television with minimal edits, as well as being more accessible on home video due to being distributed by a major company, it has become the most widely seen and recognized of the Evil Dead films.

Also notorious for its many, many different Re-Cuts - at least four are known to exist - some of which had a entirely different and considerably more depressing ending than the theatrical release.