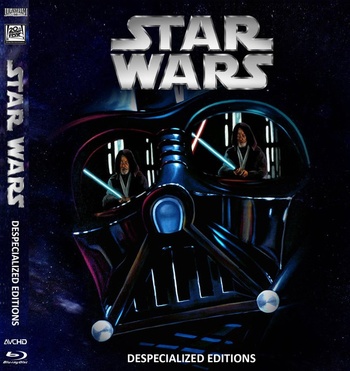 One of many options for those who want to experience the pre-George Lucas Altered Version of the Original Trilogy in glorious HD.
Advertisement:

Most of us can never be completely satisfied with a work. Sure, you love your favorite movie, but you've seen it enough times that you've started to notice some of the inevitable technical errors, and they irk you. Or perhaps there's that one character that just gets on your nerves and seems to serve no purpose for the plot. Or maybe you watch the deleted scenes and wonder why they were removed.

In any case, this probably sounds familiar. Most people don't do anything about it because they don't know how, and if they did, well, it's an awful lot of work. This, on the other hand, is what happens when obsessions are fueled by motivation and skill. Fan edits are usually labors of love, whether their intention is to file down the rough edges on a beloved classic or to polish a diamond out of a rough.

Fan edits (especially film fan edits) are in a legal grey area when it comes to copyright. Sites dedicated to them warn that you shouldn't pick one up unless you own the original movie, which is a good rule of thumb, though it's highly unlikely that someone who doesn't own the film would even be looking at fan edits of it in the first place. There are sources to download them, most of the fan edits themselves can be found with just a google search, but due to copyright paranoia, distribution methods are rarely user-friendly. Because of this, it's quite common for people to trade fan edits like concert bootlegs.