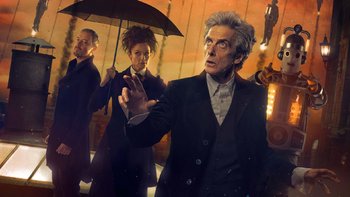 A Doctor with grey hair faces the Mondasian Cybermen in a final battle that will take a great toll on his life. Does that sound familiar? It should! note From left to right: The Master, The Master, the Doctor and Bill Potts.
Click here to see the Radio Times magazine poster for this episode: 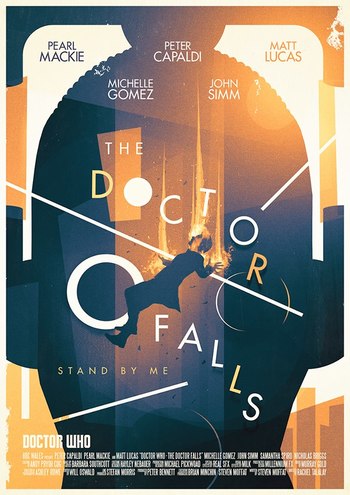 "Without hope. Without witness. Without reward."
"If I run away today, good people will die. If I stand and fight, some of them might live. Maybe not many, maybe not for long. Hey, you know, maybe there's no point to any of this at all. But it's the best I can do. So I'm going to do it. And I'm going to stand here doing it until it kills me. And you're going to die too! Some day... and how will that be? Have you thought about it? What would you die for? Who I am is where I stand. Where I stand is where I fall. Stand with me. These people are terrified. Maybe we can help a little. Why not, just at the end, just be kind?"
— The Doctor to Missy and the Master
Advertisement:

The one where the end is near for many, yet a new beginning awaits for the lucky few.

Written by Steven Moffat and continuing on from "World Enough and Time", this is the Series 10 finale of Doctor Who. Its denouement continues directly into the 2017 Christmas Episode to form a three-part Grand Finale for the Twelfth Doctor (Peter Capaldi).

The Harold Saxon and Missy incarnations of the Master have joined forces not only with each other but the Mondasian Cybermen the former helped bring into being, in a city on a gigantic colony spaceship still trapped in a black hole's event horizon. It is the Day of the Master at last, a day to destroy the Doctor for "good" and embark upon conquest of the universe...Or is it?

The Doctor turns the Cybermen against their Masters and they, Nardole, and the Cyber-converted Bill flee to Floor 507, where no previous expedition made to the higher floors ever returned from, according to Saxon. It's because the solar farmers there have successfully resisted previous attempts by Proto-Cybermen to kidnap and convert them or, more importantly, their children. But the Cybermen are still evolving on that bottom level where time runs the fastest, and two weeks later on 507 — when Missy accidentally alerts them to their location in the Masters' desperation to return to Saxon's TARDIS — everyone must brace for a siege where they will be hopelessly outnumbered and outgunned.

What can be done? The Doctor is not a man to wield weapons and he is going into this battle with two broken hearts. With his TARDIS inaccessible, he can't help Bill — whose strong mind has allowed her to resist simply becoming a mindless Cyberman since he caught up with her — regain her humanity, as much as he wants to. Missy has apparently abandoned her hopes of a Heel–Face Turn in the presence of her gleefully vicious former self, meaning the Doctor's efforts to redeem her, which Bill and Nardole agreed to help him with, were All for Nothing. And thanks to the fight in the Cyber factory city, his body is trying to regenerate and only force of will is keeping him alive as he is.

But the Doctor, especially this Doctor, is never more dangerous than when he has so little to lose. Given the choice, he will not try to flee and thus condemn more innocents to Bill's fate, nor will he go down without a fight.

Can Nardole help the Doctor find a way to fight thousands of Cybermen at once and evacuate the farmers to relative safety? Is there still hope that Missy can be redeemed? Can Bill Potts truly live again? And can the Twelfth Doctor hold to his noblest convictions and truly be a Doctor, the Doctor, through it all?

Whatever happens, it ends with the Doctor alone in a snowy wasteland...