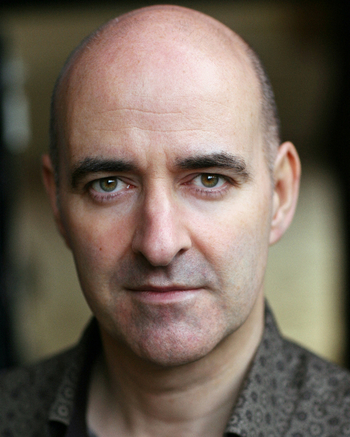 "Life is all about chance and coincidence, and luck"
Advertisement:

Nicholas Briggs (born 29 September 1961 in Lyndhust, England) is an English actor who decided, when he was quite young, that he wanted to grow up to become the Daleks. He proceeded to do just that, and is currently the voice actor for the Daleks (as well as the Cybermen, the Nestene, the Judoon, the Ice Warriors and Zygons) in Doctor Who's 2005 revival as well as his Big Finish Doctor Who audios.

After Doctor Who was cancelled in the 1980s, Briggs was a key figure in BBV Productions; he wrote several episodes of The Stranger, the film The Airzone Solution, and wrote and directed the Auton trilogy, among others. The Auton trilogy was a licensed spin-off; The Stranger and The Airzone Solution starred as many Doctor Who actors as possible and were considered Spiritual Successors to the series. Briggs also created several Doctor Who documentaries and later had an on-screen role in Torchwood: Children of Earth.

Additionally, he starred as the Doctor himself in the very unofficial 1984 fan group project (well, Briggs-with-a-bunch-of-pseudonyms project) Doctor Who Audio Visuals, years before adapting some of its stories into Big Finish episodes.

Briggs is currently Running the Asylum as the Big Finish Doctor Who Show Runner and producer, and has written many of its episodes. He also creates (and stars in) the Big Finish adaptation of Sherlock Holmes, and — very hammily — portrayed Holmes in the 2012 stage production "A Study In Fear".