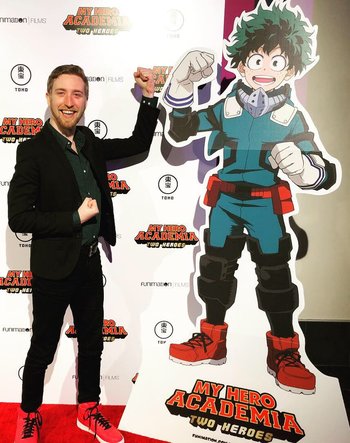 Hey there, troper. Chin up.
Advertisement:

Justin Patrick Briner (born August 23, 1991 in Baltimore, Maryland) is a voice actor that primarily works with Funimation. He's best well known for his roles as Mikaela Hyakuya from Seraph of the End and Izuku "Deku" Midoriya from My Hero Academia (which both roles can easily be considered to be his Star Making Roles in his anime voice acting career). He's often casted as protagonist characters that are either Endearingly Dorky or Wide Eyed Idealists.

He is also well-known within the abridged fandom and is closely affiliated with Team Four Star with his roles such as Cloud Strife in Final Fantasy VII: Machinabridged and Teen Gohan in Dragon Ball Z Abridged, which is not surprising considering many voice actors who worked with Team Four Star eventually establish voice acting careers with Funimation (i.e. Chris Guerrero). He's also done voice work in several indie game projects, such as Moska from Dust: An Elysian Tail and Yayan from DreadOut.

Go Beyond, tropes Ultra!
Anime is an important part of our culture!