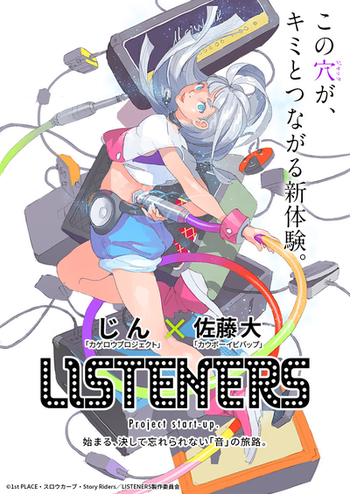 Listeners is an anime series that first aired in April of 2020.

In a post-apocalyptic future that has been torn apart by creatures known as the Earless, humanity's heroes are the Players, who pilot mecha known as Equipment to battle their inhuman enemies while also earning fame and fortune. Echo is a young tech-head who dreams of working alongside the Players and their Equipment, going so far as to build a makeshift mecha of his own, but has long since resigned himself to life in the destitute scrap-heaps that now cover much of the world.

That is, until he discovers an amnesiac girl who has a jack in her back that is the telltale sign of a Player. The pair become fast friends, the girl adopting the name μ (or “Mu”), and they vow to use their skills to fight for the world and defeat the Earless.

The series was created by JIN and Hiroaki Ando, and produced by animation studio MAPPA. Funimation handles its English release.