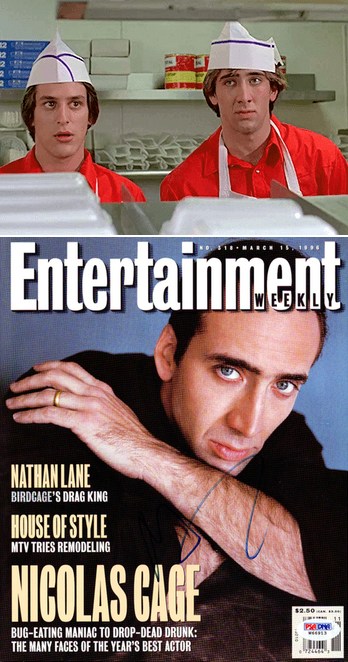 Top: Nicolas Cage as a bit-part Burger Fool in Fast Times at Ridgemont High (1982).
Bottom: Cage, fresh off the critical and commercial success of Leaving Las Vegas (1995).
A creator's first work is often not the one that makes them famous: actors may start with bit-parts; writers may have minor credits; dancers may spend time in the chorus; and so on. And in these small roles, with no fame to draw attention to them, it can be easy to overlook their presence.
Advertisement:

Then fame comes, and with fame, recognition.

And with that recognition, suddenly the presence of that creator in one of those earlier works becomes distinctly noticeable. Now, where they were overlooked, their presence is striking—indeed, surprising. An audience-member may find themselves saying: "Wait, is that...?"

This is Retroactive Recognition: The sudden discovery of a creator's presence in an earlier work, made noticeable by their later fame.

The most prominent manifestation of the trope is perhaps when you watch an older work and suddenly realize that a small role is played by an actor who became big well after the performance. You had previously seen them, but only now recognize them.

This can sometimes occur across media, when a celebrity in one medium had a brief and less-celebrated career in another.

When you just can't shake the image of the other roles, that's Role Association. If the older work is repackaged to accentuate the actor's later successes, it falls into Billing Displacement. Somewhat similar to Vindicated by History: in both cases, something or someone becomes more notable due to later fame.