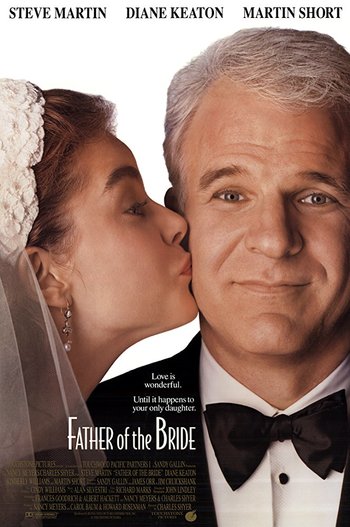 Father of the Bride is a 1991 comedy film directed by Charles Shyer. It is a remake of a 1950 film of the same title.

Steve Martin and Diane Keaton star as George and Nina Banks (no, not THAT George Banks), whose daughter Annie (Kimberly Williams-Paisley) is about to get married to Bryan MacKenzie (George Newbern). While her rather skinflint Bumbling Dad nearly has an aneurysm about the costs of the wedding, he realises slowly that Annie has grown up and is leaving him. Yes, it sounds cliché, but the film has many warm and funny moments.

Followed by the 1995 sequel Father of the Bride Part II, in which Annie gets pregnant, triggering a mid-life crisis in George that ultimately ends up getting Nina pregnant too.

In 2020, the cast reunited to film a mini-sequel called Father of the Bride Part 3 (ish). The plot concerns George and Nina's now fully grown son Matty getting married over a Zoom call during the COVID-19 pandemic.