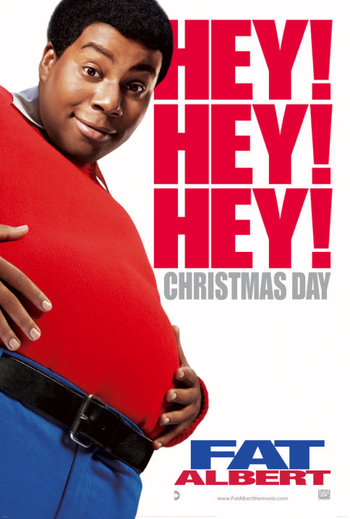 The Fat Albert movie was produced by 20th Century Fox and released on Christmas Day 2004. It is the live-action reboot of the '70s animated series Fat Albert and the Cosby Kids, written by Bill Cosby, directed by Joel Zwick, and starring Kenan Thompson as the title role.

The story follows around a lonely teenage girl named Doris (Kyla Pratt) whose foster sister, Lauri (Dania Ramirez), is more popular than her and whose grandfather died before the events of the movie. After having another bad day, she tunes into Fat Albert and in the middle of one of their re-runs, she starts crying, causing a tear to hit the remote. This opens a portal between the cartoon world and the real world. Fat Albert notices this and, compelled to help her, enters the real world through the TV; soon, the gang follows. This causes all the characters to change from animated to real. However arrogant jock Reggie (Omarion Grandberry), begins to grow suspicious of Fat Albert and the gang.

During the course of the film, Fat Albert and the others decide that they like the real world a lot better and discover the modern world of North Philadelphia as well as help Doris make some friends despite her denial.