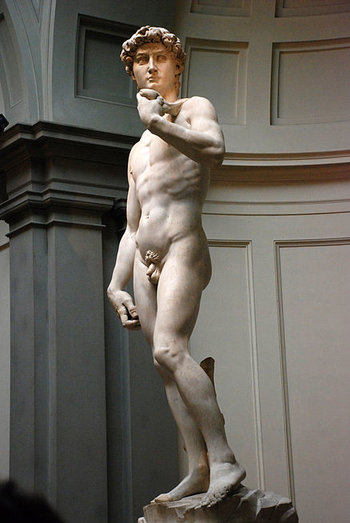 The David is a stone sculpture by Michelangelo Buonarroti, finished in 1504. It memorializes the moment from 1st Samuel where the shepherd David accepts his duty to battle the Philistine warrior Goliath for the sake of Israel, the chosen nation of God.

There are several depictions of David in Renaissance art, and multiple well-known sculptures, including one made by Donatello nearly 100 years before, but Michelangelo's version remains famous enough that it is sometimes referred to as the David.

The original is currently located at the Galleria dell'Academia (photo) in Florence. A replica stands in front of Florence's Palazzo Vecchio where the original once was, and a second bronze replica overlooks the city from the aptly-named panoramic Piazzale Michelangelo.

The David provides examples of:

The David appears in the following works: