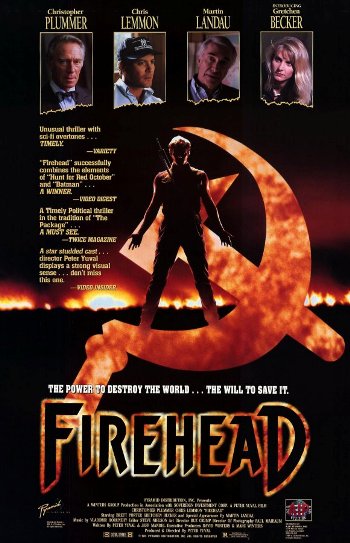 From the producer of Space Mutiny comes Firehead, a 1991 film that does for spy thrillers what Mikhail Gorbachev did for Communism.

A Soviet supersoldier, Ivan Tigor, defects to the United States rather than use his laser-vision on innocent protesters. Once in America, he goes rogue and begins blowing up munitions factories. To bring Ivan in from the cold, his handlers enlist Warren Hart (Chris Lemmon), an NIH chemist. But when Hart finds Ivan, he learns that things are more complicated than they appear. Together, they must thwart a plot by a crypto-fascist (Christopher Plummer) who plans to use Ivan's attacks as a pretext for world war.

Along the way, they bump into Martin Landau, eat hamburgers, and rescue the president.