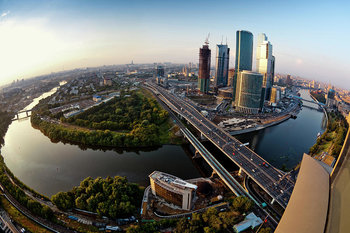 The Moscow skyline as seen through a Fisheye Lens.
Behold at last that celebrated city!
—Napoléon Bonaparte. Things went downhill for him from there.
Advertisement:

Moscow is one of the world's most populous cities and the only city in the world with a dedicated missile defence system (permitted under the 1972 ABM Treaty). The area is also a no-fly zone, bar parades. The official population count is 12 million, but if you take unregistered residents and suburbs into account, you'll have to double this number.

The most famous part of Moscow is the Red Square. The name actually predates the October Revolution. The Russian word "krasnaya" means "red" but formerly also meant "beautiful," and it was in this sense that the word was originally used (in fact, from the 18th century almost to the 20th century, the iconic red bricks of the Kremlin were painted white). It's smaller than it was, with some of the churches that were bulldozed by the Communists now rebuilt. It is a pedestrian area all year round, bar parades.

The other most notable features are St. Basil's Cathedral and the Moscow Kremlin. Kreml' (anglicized to "Kremlin") means "citadel" in Russian and is not unique to Moscow. Many Russian medieval towns sprung up around kremlins and still exist today. However, only the Moscow Kremlin is well-known outside Russia. Some foreigners also mistake St. Basil's Cathedral (the one with the famous onion domes) for the Kremlin, due to its iconic status and their proximity to one another (the Cathedral being located barely 50 meters from the Kremlin gates). The Moscow Kremlin is the seat of the Russian presidency (the government, as in "cabinet of ministers", sits in a building confusingly known as the White House), and is highly recognizable (not as much as St. Basil's though) and has formed an Establishing Shot for many movies.

Places of interest in the Kremlin:

Other places of interest:

Moscow is a mostly round city, so its internal divisions are organised by several concentric beltways. At the very centre lie the Kremlin, Red Square and the ancient neighbourhood of Kitay-gorod (in modern Russian it means "Chinatown," but it got that name long before Russians started calling China "Kitay," so it has no connection to the Chinese diaspora; in Old Russian, Kitai-Gorod stood for Basket-town, since the walls were originally made of baskets filled with clay). The beltways that surround it are the incomplete Boulevard Ring (the innermost), the Garden Ring, the 3rd Ring Road and the MKAD (the outermost). When people say "central Moscow" they usually mean "within the Garden Ring." The areas between it and the 3rd ring, as well as some areas to the latter's immediate north, are mostly old industrial neighbourhoods, while most of the neighbourhoods between the 3rd ring and the MKAD are residential. A fourth ring road, between the 3rd and the MKAD was in plans, but the project was abandoned in favor of building several chords that are in pre-building state now. The next ring is so-known Small Moscow Ring is roughly 50 km ring road in far Moscow suburbs. Moscow, however, is split with railways and rivers along radii, so the picture is not so beautiful. Until 1984 the MKAD was the city border, but then Moscow annexed several towns on the outside. Despite that the MKAD still serves as a cultural border between Moscow and its suburbs, and Muscovites are often stereotyped to believe that all of Russia beyond the MKAD is complete wilderness, except for the aforementioned Rublevo-Uspenskoe and St. Petersburg (though St. Pete, as the joke goes, is too cold, wet and dull to have much of a life there).

Moscow also doesn't have enough roads and rapid transportation, so existing systems are overused to the breaking point. Flats are also extremely expensive, so things are even worse, such many employers come from near and not so near suburbs. Avoid metro at rush hours at all costs, you may be flattened. If you don't know what you are doing, avoid the use of buses, trams and other road transport at rush hours as well (ironically, it is most part of working days) In addition to the risk of flattening you may lose several hours in a traffic jam. Railroads, metro and your legs (so-called 'number eleven') are your best friends here...

Moscow is sometimes referred as Default City in Russian segment of Internet (Yes, in English, but usually transliterated in Cyrillic). If Russian internet users don't see any specific city named, they think Moscow. "Well, this is the only real city in Russia!" they say. And really, when you see on the Internet an announcement of some concert or other public event that has an address but doesn't have a city specified, you can safely presume that it's in Moscow. Not stating the city is an irritating habit of specifically Moscow-dwellers who seem to think that everyone worth their attention and advertising to either lives in Moscow or can visit it for that one event. Other nicknames include pre-Internet "the Big Village" and "Нерезиновая" (Nerezinovaya), meaning 'not strechable' and referring to the constant influx of immigrants (and generally people who lived there less than you did).

If the Internet is anything to go by, Moscow seems to be increasingly disliked by the rest of Russia (some people going as far as half-jokingly proposing to split the country into two parts - Moscow and everything else, or "get rid of Moscow", or something like that). The main cause appears to be the perceived arrogance of the city's inhabitants, their supposed ignorance regarding the rest of the country and rudeness towards any visitors to the city. Whether this dislike actually has foundation is up for debate - and indeed, numerous debates ensue. Many people believe that all the taxes and economic output of "the regions" just gets funneled into Moscow, while Muscovites believe that the regions are just populated by lazy idiots. Whether or not the inhabitants can truly be called "arrogant," the predominance of Moscow in Russia is indisputably real. A disproportionate amount of wealth, power, and influence is accumulated in the city, along with almost all the political influence (despite what Saint Petersburg would like to believe). No other city even comes close.

In Tsarist Russia, Moscow was ruled by a mayor or governor appointed by the tsar. In the Soviet Union era, Moscow was ruled by the First Secretary of the Moscow Communist Party and the Chairman of the Executive Committee of the Moscow City Council. The Moscow secretary was the most powerful local politician in the USSR, and both Khrushchev and Yeltsin held this post. Now, in The New Russia, Moscow is led by a mayor again, albeit one with the powers of a governor; Moscow and St. Petersburg are both "Federal Cities" having the same status as other "federal subjects" of Russia. (Having a mayor have the same powers as a governor is common for city-states within a federation; the Germans have this arrangement with Berlin, Hamburg, and Bremen, and the Austrians have it with Vienna). What's strange here is that Moscow has a mayor with the powers of a governor, and St.Petersburg has a governor, despite the otherwise identical federal status of the cities.

The mayoral title is just a historic fluke coming from the early Nineties, when the post originated, and it still has gubernatorial powers and responsibilities. The first mayor, Gavriil Popov, was elected in 1990, but resigned in 1992, so Yuri Luzhkov was elected mayor. Luzhkov was the mayor until 2010, when he was fired by President Dmitry Medvedev mainly for defying his orders. Medvedev appointed Sergei S. Sobyanin to replace him, and Sobyanin remains the Mayor of Moscow as of August 2019.

Moscow must be one of the most doubled cities in the world. Helsinki, Finland is known for frequently playing Moscow in American films made during the Cold War. You know the stereotypical Hollywood depiction of a totalitarian city with concrete, brutalist architecture and grey, overcast skies? Moscow actually looks like that.

All joking aside, this is becoming less true as the Soviet period recedes further into the past. This is particularly visible with the Moscow International Business Center - a newly-constructed commercial and financial district with sleek, ultra-modern skyscrapers similar to those found in the United States or China (though not, funnily enough, the rest of Europe, which has consistently avoided building tall skyscrapers in its major centers. Eight of the top ten tallest buildings in Europe are all in Russia, and seven of those are in the Moscow Business Center.)

Even Russian movies sometimes have to double Moscow when the setting is "Old Moscow", which could mean either Soviet Moscow before World War II, Imperial Moscow before the Revolution, or wooden Moscow before the Empire. St. Petersburg is most commonly used for the first two, while the third is usually doubled by one of the Golden Ring cities

Examples actually filmed in Moscow (outside Soviet and Russian films):