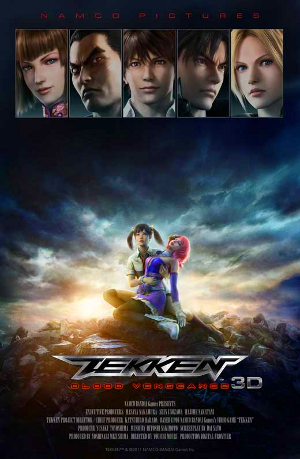 Not pictured: the panda.
Advertisement:

What happens when a video game developer gets angry enough with the adaptation of their video game?

They make the adaptation themselves, of course.

Tekken: Blood Vengeance is a CGI film based on the Fighting Game series Tekken. It is produced by Digital Frontier and written by Dai Sato (Cowboy Bebop). The film was directed by Youichi Mouri, the same person who directed the Tekken 5 and Tekken 6: Blood Rebellion opening cinematics. The soundtrack is composed by Basiscape. Unlike the live-action movie that came out in 2010, this one was more directly supervised by Namco themselves.

The plot follows Ling Xiaoyu as she is tasked by the G Corporation to infiltrate an international school in Kyoto to gather information on a mysterious student named Shin Kamiya. Not so long after that she makes friends with Alisa Bosconovitch while Shin gets kidnapped by an unknown assailant. Now it's up to Xiaoyu and Alisa to find Shin and solve the mystery behind him.

The film was released on a special Tekken Hybrid Blu-ray Disc in November 2011. The Blu-ray also includes an HD remake of the original Tekken Tag Tournament which can be run on PlayStation 3 along with a special demo version of Tekken Tag Tournament 2. Nintendo 3DS owners also got to join in the fun, as Namco included Blood Vengeance in the same package as Tekken 3D as part of the Tekken 3D: Prime Edition bundle.