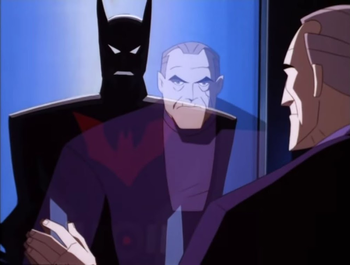 The Jokerz ran away, and Batman went gray.
"Maybe I’m not as tough as I used to be, but my brains can make up for that and my hands are still quick enough."
— Raul Tejada, Fallout: New Vegas
Advertisement:

How well do you know your neighbors, shopkeepers, the old guy down the street with all the little mementos from around the world? If you haven't known them your whole life there's a chance they may be a badass.

Just as badasses come in many different varieties, so do retired badasses. Some are happily retired from adventuring, sports, fighting, or whatever they used to do and are content to live a normal life in a normal little town, or even the simple life in Arcadia. Some have become shopkeepers who just do a little work to keep in touch with people and get by in their old age. Some get promoted within their organization to a Desk Jockey supervisory role. Often, they spend all their time tending a field. Some of them never really get into retirement because every time they start to settle into it they get jolted back out. Maybe they have a secret longing to get back into the game, (whatever it may be) or regrets about the past. Often they're perfectly happy in their retirement and are pointedly ignoring events of the outside world until the evil Mooks of whatever Big Bad that is looking to take over the world come in and wreck his shop, then laugh at him because, after all, what can an old man do about it? It doesn't take long for the asskickery to commence.

Their personalities often break down into two broad categories; some are Zen Survivor types who've made peace with their past and the fact that they are no longer The Hero, and now just want to get on with their life. Other times, bitter and cynical with age, they turn into a Straw Nihilist after being put on the scrap heap of life.

One thing badasses of all types have in common is that they're magnets for trouble, and even in retirement this doesn't change. Occasionally these guys get pulled back into action because the Big Bad (or his men) know his reputation and come to make trouble. Other times it's because a young Arrogant Kung-Fu Guy wants to make a reputation by beating the old legend. Perhaps the most frequent case is that when the heroes are in trouble and need help to accomplish their goals, they will come to the Retired Badass either for physical help or advice about their quest or because the retired badass is a past teacher, mentor, even father figure.

Exactly how the retiree in question will respond may vary. Sometimes they will come fully out of retirement to join up with the heroes and their party, sometimes they will just give some words of advice and/or an epiphany that the hero couldn't come up with on their own, (or teach the hero something specific, like the ever-popular Dangerous Forbidden Technique) but often they're just as likely to simply fade back into retirement once the immediate situation has been resolved. Their help or advice is frequently a one-shot deal: sure they can point a hero in the right direction, but after that, (and wiping the floor with some disrespectful mooks like those mentioned above), don't look to them for further help. After all, it's a big world and they're getting too old or disillusioned to play hero. Let someone younger pick up that mantle and save the world while they get back to living off their pension. However, they are usually more than capable of a Let's Get Dangerous! moment if needed. Expect him to have an Emergency Stash of money / weapons / IDs when needed.

Occasionally, a current hero will turn into The Knights Who Say "Squee!", much to their embarrassment of their fans, who treated what they thought was an insignificant elderly person with contempt.

Compare: Older and Wiser, Old Master, Cool Old Guy, Old Superhero, Retired Gunfighter. Compare and contrast to Retired Monster and Retired Outlaw. A retired badass is one of the more common types of Heroic Neutral. Those that are willing to come entirely out of retirement to help a hero, (such as the Student and Master Team, for example) need to beware the Mentor Occupational Hazard, or at the least of being less badass than they used to be because they're Feeling Their Age. Might be the fate of a Kid Hero All Grown Up.

When someone's mission is to seek out a group of them and rouse them back into action, they're on a Retired Badass Roundup.

This crazy grandpa car shows he is quite the master at racing.

This crazy grandpa car shows he is quite the master at racing.