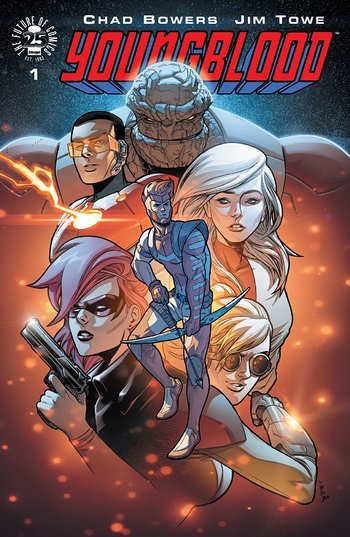 Youngblood (2017) is a relaunch and Soft Reboot of the (in)famous Youngblood series originally by Rob Liefeld, written by Chad Bowers (X Men 92) and drawn by newcomer Jim Towe.

Taking place around ten years after the original comics, the titular Youngblood have been denounced by the public as overly-violent murderers who were only brought together by money and fame. Original member Diehard is now the President of the United States, with Nikola Voganova aka the first Vogue now his wife and First Lady. The other members have been ordered to cease operations or be prosecuted, and new superheroes as a whole are now managed by the "Help!" app.

Help! allows one to contact any nearby superhero to solve crime, with a 5-star rating system given based on their performance. Secretly however, Help! is just a front used to find, capture and experiment on superhumans. The disappearance of one hero in particular, the Sizeshifter Man-Up, kicks off the plot when his friend Petra Gomez, aka Vogue II, sets out to find him. This leads to the reformation of Youngblood, consisting of its two most classic members with four newcomers. They set out to be a Redeeming Replacement to the old team.

Together, they set out to be the next generation of heroes.

Youngblood was officially cancelled after Issue #12, in part due to Jim Towe leaving the project to work for Marvel, and according Liefeld, the story became too big for the main book to handle. Liefeld announced that the series would be relaunched as an event called Bloodwars, but a year later announced that he'd in fact lost control of the Youngblood property, and the series would once more be left with No Ending.

Youngblood (2017) has examples of the following tropes: