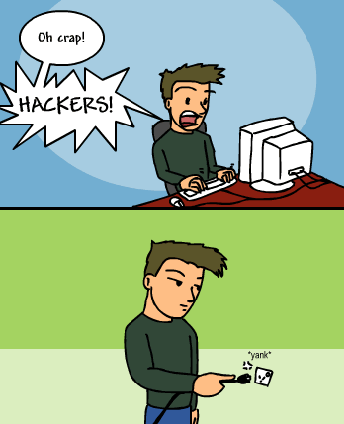 A very exotic device or problem, against which all manner of intricate, powerful devices or strategies fail, is counteracted by something incredibly simple and mundane. It can't be solved by their conventional solutions of More Dakka, Attack! Attack! Attack!, diplomacy, or other Rule of Cool applications. Applied Phlebotinum, it seems, often turns out to have a weakness to some household product.

Supernatural beings in both Eastern and Western mythology have a tendency for strange weaknesses, like a demon's obsessive-compulsive need to count dropped grains of rice or a vampire's vulnerability to garlic and sunlight.

Can be preceded by someone Stating the Simple Solution, followed by a Face Palm and/or a Glad I Thought of It moment.

Compare Logical Weakness, where the weakness isn't necessarily obvious or mundane but makes perfect sense with a little thought, and Cutting the Knot. Contrast with Mundane Utility, where something exotic is used to solve something mundane, and Weaksauce Weakness, where a no less powerful individual gets strange weaknesses or power. Many things that are Boring, but Practical are usually (though not always) one of these. Related to Muggles Do It Better. See Combat Pragmatism for when this concept is applied to fighting.

Let's be absolutely sure the example you're about to post isn't actually a Weaksauce Weakness, please.

Doviculus meets the leader of the Human Uprising and take the opportunity without hesitation.

Doviculus meets the leader of the Human Uprising and take the opportunity without hesitation.