Recap / My Little Pony: Friendship Is Magic S2 E20 "It's About Time" 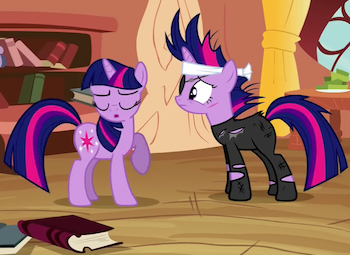 Spike is leading the love of his life, Rarity, through a wonderful world made of ice cream... until he hears the clopping of hooves, whereupon he wakes up to find Twilight nervously pacing at 3:00 am. Turns out she's discomforted because, after planning her schedule for the month, she didn't allocate any time to work on next month's schedule, so now her whole year could be thrown off. Annoyed, Spike returns to bed in hopes of returning to ice cream land.

Later that morning, Twilight is still fixing her various schedules when a burst of purple magic abruptly goes off in the middle of the room. It subsides to reveal a purple unicorn with a torn spy suit, an eye patch, a disheveled mane, a bandaged head, and a scar on her face — Twilight herself! Now there are two Twilights, except one's from the future, and looks like she just walked off the set of Escape from New York. Is she perhaps from some distant time, when Equestria is embroiled in some sort of epic pony war?

Future Twilight has an important message to convey, but Present Twilight is so excited at the prospect of Time Travel that she's full of questions. Future Twilight has to put a hoof to her mouth to get her past self to shut up, but before she can deliver her message ("Whatever you do, don't —"), she disappears in a flash of light. Suddenly realizing that she should have listened to herself, Twilight is charged up to prevent whatever unspecified cataclysm that's about to befall Equestria!

Rushing outside, Twilight warns Ponyville of the impending calamity; everypony laughs at firstnote including a certain brown pony with an hourglass cutie mark, but she soon convinces them to take her warning seriously. The pegasi search the skies across Equestria, while everypony else fixes every crack, loose bolt, and stray hair across Ponyville. But even taking every preventive measure doesn't seem enough...

Suddenly, Cerberus, Guardian of the Gates of Tartarus — where all the most evil beings in Equestria are kept — appears in the middle of Ponyville! He must be the disaster! Steeling herself, Twilight prepares for battle... until Fluttershy tames the beast by tickling his tummy. Realizing that Tartarus is still unprotected, Twilight borrows a ball from Pinkie Pienote she keeps them hidden around Ponyville just in case, then lures the big lug home.

Twilight Sparkle returns home the next morning, whereupon Spike burps up a "lost dog" flyer from Princess Celestia, which gives her a paper cut on her cheek — the exact same one her future self had! Since this means the future hasn't changed and the great disaster is still to come, Twilight decides to do nothing at all until Tuesday, not even move. Spike and Rainbow Dash decide to have fun at her expense, with Spike eating ice cream by the tubful and tickling her. Twilight telekinetically tosses Spike away, causing him to accidentally belch fire and scorch Twilight's mane, giving her the same style her future self had! Pony Armageddon is still underway!

Spike suggests a visit to a fortune teller, "Madame Pinkie". With her gypsy magic, Pinkie Pie tells Twilight that… she will get a really awesome birthday present next year. Twilight asks her to use her Pinkie Sense instead, but Pinkie explains that it's only for vague, immediate events — like a flower pot suddenly falling out of the sky onto Twilight's head.

Pinkie Pie: ...Where did that even come from??

Pinkie Pie visits Twilight the next day, who has an epiphany (as well as a bandage) — disaster can be averted if she monitors everything until Tuesday! But when Pinkie reminds her that Tuesday is actually tomorrow, Twilight gets into a panic, then ends up looking at the sun through a telescope and blinds herself. While Pinkie provides an emergency eye patch from her secret stashes around townnote you know, just in case, Twilight decides there's only one thing left to do: Stop time itself.

Remembering that Future Twilight said that the time spells were locked away in the Starswirl the Bearded Wing of the Canterlot Archives, Twilight takes Spike and Pinkie with her to Canterlot. After donning black catsuits, eating ice cream, sneaking past guards, going in a circle, eating more ice cream, and having a helpful guard let them into the wing, the trio begin a frantic search for the time spells — but they're too late! Dawn is breaking, Tuesday morning is here! As Twilight realizes she now looks exactly like her future self, she panics, bracing for the impending disaster...

...and nothing happens. Princess Celestia walks by and says hello. The sun is shining. It's a pretty nice day.

Twilight finally realizes that she's been worrying too much, and pledges to solve problems as they come and let the future handle itself. As Twilight muses that it would have been better if only she had learned this sooner, Pinkie Pie shows a scroll that she found, which can send someone back in time for a few minutes. Twilight decides to use that to warn her past self not to worry about the future.

...oh, so that's where Future Twilight came from! Oh well, it's Past Twilight's problem now. After a few laughs, the girls head home, especially now that Spike has a stomachache from eating too much ice cream. He had assumed that would be Future!Spike's problem... until he became Future!Spike.

Twilight gets a message from her future self (from next Tuesday morning) about the future.

Example of:
Ominous Message from the Future

Twilight gets a message from her future self (from next Tuesday morning) about the future.