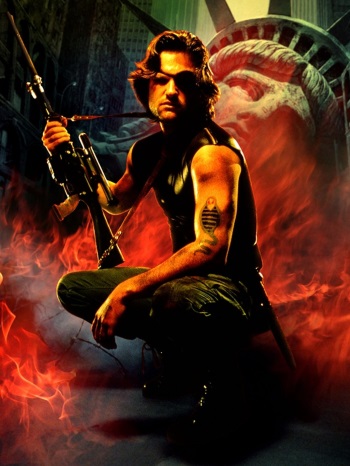 The original mulleted, eyepatched badass named Snake. No relation to that other one.
Bob Hauk: You go in, find the President and bring him back in 24 hours, and you're a free man.
Snake Plissken: 24 hours, huh?
Advertisement:

Released in 1981, Escape from New York is a cult-classic action film featuring the dream team of director John Carpenter and star Kurt Russell.

20 Minutes into the Future (well, sixteen years, as the film takes place in the year 1997), the President's plane crashes in New York City — specifically Manhattan, which has become a giant penal colony filled with savage gangs that are led by "The Duke of New York" (Isaac Hayes). The commissioner of the United States Police Force, Bob Hauk (Lee Van Cleef), is left without any realistic options for a rescue, so he recruits the most badass criminal he can find to get the President out: Snake Plissken (Russell). When Plissken says he wants nothing to do with the mission, Hauk forces Snake into compliance with an Explosive Leash — if Snake doesn't get the President out of New York within a certain amount of time, the leash goes boom and Snake goes with it.

This film is a classic of the dystopian future genre, and Snake himself is a classic Jerk with a Heart of Gold Anti-Hero. Snake's history is mostly just hinted at, but an out-of-print Novelization fills in some of the details.

Fifteen years later, Russell and Carpenter reunited for a sequel, Escape from L.A., which dispensed with much of this film's grittiness to lampoon Los Angeles and Hollywood culture. It was not met with nearly the same level of acclaim as this film.