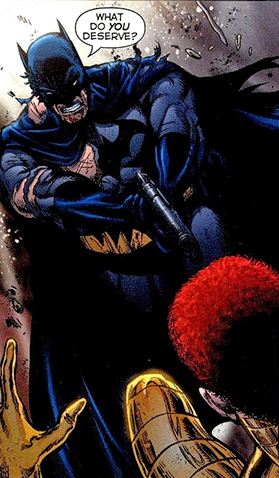 Batman is normally against using guns.
But for this guy, he's making an exception.
Tales without end are told of these massive, lonely figures who bore half-seriously, half-mockingly a motto adopted from one of Salvor Hardin's epigrams, "Never let your sense of morals prevent you from doing what is right!"
— Encyclopedia Galactica's entry on traders, "The Traders", Foundation (1951)
Advertisement:

An Archetypal Character who is almost as common in modern fiction as the Ideal Hero, an anti-hero is a protagonist who has the opposite of most of the traditional attributes of a hero. They may be bewildered, ineffectual, deluded, or merely apathetic. More often an anti-hero is just an amoral misfit. While heroes are typically conventional, anti-heroes, depending on the circumstances, may be preconventional (in a "good" society), postconventional (if the government is "evil")

or even unconventional. Not to be confused with the villain or the Big Bad, who is the opponent of Heroes (and Anti-Heroes, for that matter).

Most are to the cynical end of the Sliding Scale of Idealism Versus Cynicism.

There are just as many variations on Anti-Heroes as there are normal heroes. Some common attributes are: rarely speaking, being a loner, either extreme celibacy or extreme promiscuity, parental issues, occasional Past Experience Nightmares and flashbacks relating to a Dark and Troubled Past that can take many forms depending on the Anti-Hero in question; and being able to tell the story of their life through any Nick Cave song. Some won't Save the Villain, but they will Shoot the Dog, and they will not hesitate to kill anyone who threatens them.

Other characters may try to impress upon them the value of more traditional heroic values through The Power of Friendship, but these lessons tend to bounce more often than stick.

What amoral antiheroes learn, if they learn anything at all over the course of the story, is that an existence devoid of absolute values offers a lot of isolation. Which may be to their liking. Don't You Dare Pity Me! is common, and gratitude may be repulsed with Think Nothing of It (just to get them to leave them alone).

These often crop up in deconstructions of traditionally heroic genres. As the struggling, imperfect protagonist begins to gain more respect and sympathy than the impressive-but-impossible-to-relate-to invincible superhero, "anti" heroes have come to be admired as a perfectly valid type of hero in their own right.

Sometimes, they're not the "star" (protagonist), but serve as The Rival or Worthy Opponent of the protagonist and are prone to becoming a Ensemble Dark Horse as fans enjoy their interactions with the protagonist. If they are part of a Five-Man Band, they will most certainly be The Lancer. Well liked ones may become a Deuteragonist or at least get A Day in the Limelight to please the fans.

The term is used more loosely today than it used to be, at least on This Wiki. In one definition of the word, the appeal of an antihero is that they're often very literally a hero: Namely; they do heroic deeds. But whereas Superman, Wonder Woman, and many other conventional heroes have both the physical and moral capabilities to do it, an antihero almost never has both.

Anti-Heroes are spread all over the alignment chart, tending towards Neutral types (and Good ones if the anti-heroic side of his character is less prominent). While the Knight in Sour Armour or the Classical Anti-Hero aren't actually morally flawed, and can even be pure good characters, the other anti-hero types are never pure good, as they tend towards the morally grey zone.

If you've been sent here by a work referring to someone as a "Type-I" antihero (or so forth), they are referring to Analysis.Anti Hero, which is a sub-page of this one. Since those numbers are no longer used even on that page, they should be replaced with an appropriate named type.

Compare and contrast this trope with its antithesis, the Anti-Villain. A character who is a Wild Card or a Heel–Face Revolving Door can be capable of being both an Anti-Hero and an Anti-Villain depending on whether or not they are acting for or against the protagonist at the time. For an ensemble of these heroes, see Anti-Hero Team.

Not to be confused with the webcomic Anti-Heroes, or Villain Protagonist, where the Anti-Hero is outright evil.

Character types particularly prone to anti-heroism (though many have their share of straight-up heroes, and villains too) include: