Webcomic / Templars of the Shifting Verse 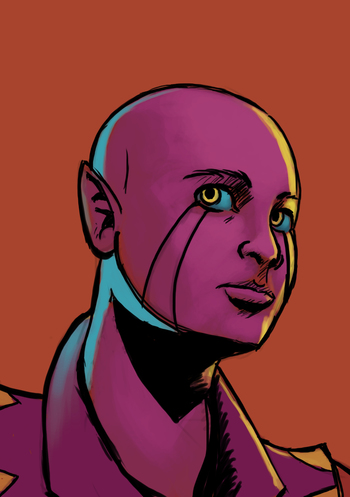 Augustus Praxio - the main Templar
The Templars of the Shifting Verse is an ongoing fantasy webcomic series written and drawn by Christopher Hazeldine.

It's the 1950's in a fantasy world that resembles our own and magic is fading. Technology has replaced magic in peoples' everyday lives and many people view magic users with some level of suspicion and fear. The governments and churches of the world have cornered and controlled the knowledge of magic, as well as patterning over its place in the history.

However, there are those who lived through much of the past, the Templars of the Shifting Verse. They are four immortals led by the revered Augustus Praxio and housed in a mysterious stone temple, The Hall, (with a living extension for comfort) that has the ability to teleport around the world. Throughout history they have intervened suddenly and precisely at key moments where dark forces threatened to overwhelm the world. Their story has warped - as history often does - into mythology, and no-one but they know the full truth. Many believe they are an army led by a demigod, other's believe they are a dangerous cult - they are careful to maintain their mystery and privacy, but can it survive the onset of the communication age?