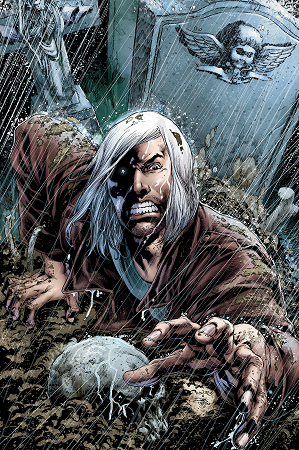 The Doctor: When did you realize?
Jack: Earth. 1892. Got in a fight on Ellis Island. A man shot me through the heart. Then I woke up.
— Doctor Who, "Utopia"
Advertisement:

Characters with Resurrective Immortality can die just like anyone else. The thing is, they will not stay dead.

When killed, they will always return to life and look none the worse for wear. This is not necessarily due to a regenerative capability, though this sometimes also applies. Characters with resurrective immortality can be injured like anyone else, and can also suffer, survive or die from an illness.

On the plus side, this means that Death Is Cheap. Any enemies they have will never be able to kill them. For The Cape, this means they will never fall in the line of duty. For the thrill seeker, this means they can get a higher adrenaline fix than any of their mortal fellows and can try things no regular person would ever dream of - what's the risk of dying from trying to do something awesome if you'll just come back good as new? If they fall for someone whose species also lives forever, then they have a shot at Eternal Love.

On the negative side, this could be a Fate Worse than Death. Someone could torture them indefinitely without worrying about accidentally killing them. In any case they will feel the full pain of dying each and every time. Less maliciously but equally unpleasantly, this can lead to characters who normally have a no-killing rule not feeling any need to pull their punches. And work creators who go by Rule of Cool often can't resist showing this off as frequently and gruesomely as possible.

This is the signature ability of The Phoenix. It can also be a perk of being undead, particularly for vampires and liches. May overlap with other Immortality tropes, such as The Ageless, Immortality Inducer and Fighting a Shadow.

If they always come back in a certain spot, it's Respawn Point. If their mind is being transferred to a new body, it's Body Backup Drive, instead. If they respawn or are reborn as an infant, it's Born-Again Immortality. And if they're a secondary-character who dies for comedic effect, that's They Killed Kenny Again.

See Joker Immunity for when a character isn't allowed to die because of Plot Armor. See Unexplained Recovery if no real reason is given for the resurrection. A Mistaken Death Confirmation may happen if someone checks their body for life signs before they revive.