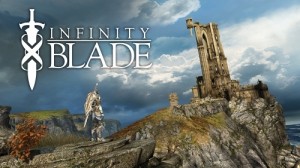 "Father, I will avenge you."
Advertisement:

Infinity Blade is a 2010 action game for the iOS (iPad and iPhone) operating system. It was developed by Chair Entertainment (a subsidiary of Epic Games), previously best known for Shadow Complex, and is notable for utilizing Unreal Engine 3.

In the game's tutorial, a nameless warrior faces off against the villainous God King. The God King easily dispatches the warrior, adding his strength to the titular Infinity Blade.

About 20 years later, the warrior's son returns to kill the God King. If the second warrior is killed (which is likely, considering how tough the God King is), his son will return to continue the cycle (called a bloodline in game). The third warrior's son takes up arms after the death of his father, and so on. Bloodline after bloodline rises up to fight the God King.

The game plays like a swordfighting version of Punch-Out!!. Enemies are fought one at a time and player movement is limited to quick dodges rather than actual sidestepping during fights. The warrior can also block and parry attacks, and retaliate with his own sword or magic spells.

As the warrior kills enemies, he gets gold to buy better equipment and experience to make him a better fighter.

In addition to the games, two novellas by Brandon Sanderson have been released, titled Infinity Blade: Awakening and Infinity Blade: Redemption. Released shortly before each sequel, the novellas bridge the gap between each game, and greatly expand on the setting and its backstory.

Unfortunately, as of December 10, 2018, the entire series has been removed from the App Store, rendering them unobtainable by anyone who didn't already own them. After the series ended, its legacy was left gathering dust, the one time it being acknowledged in Fortnite Battle Royale Season 7, with the titular blade obtainable as a special weapon.

A strong list of tropes indeed, this bloodline will serve us well: