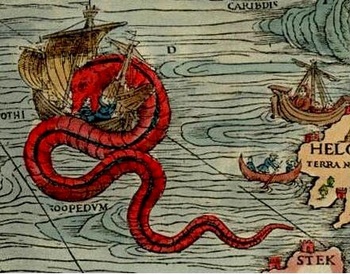 Here there be monsters.

Since ancient times, some cultures have had a superstitious fear of the ocean. It was vast and almost completely unknown. It could smash any ship man dared float on it, or sweep it away, never to be heard of again. Oh, and there may have been gigantic monsters in it. Until recent centuries many sea charts were illustrated with mythical and fearsome sea-creatures in unexplored regions, and even today the weirdest creatures on Earth are to be found beneath the waves, and we're still finding more. Some of them are pretty enormous, too (though they're not the most dangerous things down there).

There are many flavours of Sea Monster (well, yes, most taste a lot like squid, unsurprisingly). These subtropes include:

Please place examples belonging to those subtropes only in the specific page, not here.