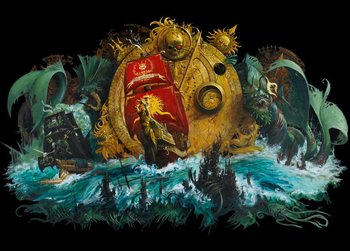 Dreadfleet is a pirate themed role playing board game based in the world of Warhammer. It was created by Games Workshop and released in stores in October 2011. It is a two player game where one player controls the titular Dreadfleet, an army of monsters and warlords led by the vampire Count Noctilus, and the other player has the Grand Alliance, a collation of sailors and pirates determined to stop the Dreadfleet from controlling the seas. The two sides fight in a treacherous stretch of water known as the Galleon's Graveyard. The game's rule book features an extensive story regarding all of the playable character's and their respective ships.