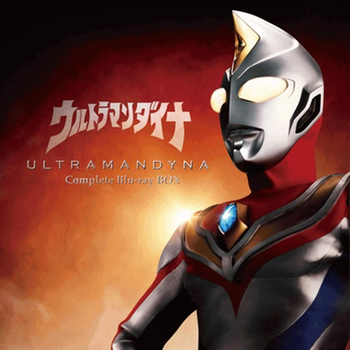 Ultraman Dyna is a tokusatsu series that ran from 1997 to 1998, part of the Ultra franchise. It functions as a Sequel Series to Ultraman Tiga, set seven years after the series' end.

In the Neo Frontier era, humans have begun terraforming Mars and other planets. To this end, a new incarnation of GUTS, Super GUTS, has been made to combat various threats. Shin Asuka, a light-hearted member of the team, becomes Dyna's host when the alien Spheres come to invade Mars. Now, he fights for the Neo Frontier whenever he is needed, either as a Super GUTS agent or as Ultraman Dyna.

A film set during the series, entitled Ultraman Tiga and Ultraman Dyna: Warriors of the Star of Light was produced. Dyna/Asuka also returns in the later films Mega Monster Battle: Ultra Galaxy Legends and Ultraman Saga.