Film / Ultraman Tiga and Ultraman Dyna: Warriors of the Star of Light 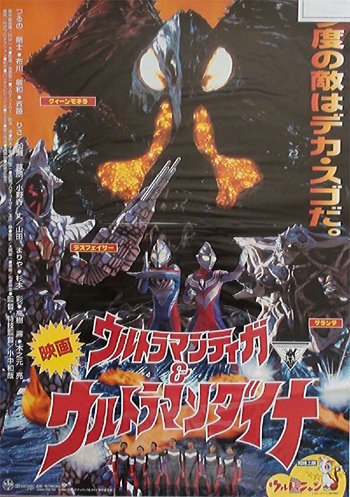 Welcome back, Tiga. Ready to save the world again?
Advertisement:

Ultraman Tiga And Ultraman Dyna: Warriors Of The Star Of Light is a 1998 tokusatsu movie produced by Tsuburaya studios, the Big Damn Movie for Ultraman Dyna and part of the Ultra Series. True to its title, the hero from the previous series, Ultraman Tiga, makes a comeback.

A routine Super GUTS battle on the moon is suddenly interrupted by the juggernaut battleship, Prometheus, the latest, state-of-the-art technology developed by Super GUTS' top secret base, which completely vanquished an alien threat Super GUTS and Ultraman Dyna had difficulties facing. Just as the necessity of Super GUTS' existence is being questioned, now that they have this brand-new super-weapon, suddenly an alien cruiser attacks the base. Ultraman Dyna and Prometheus arrives to engage in battle, but Prometheus is not what it really seems, and a conspiracy hidden deep within the ranks of Super GUTS could threaten the continued existence of mankind...

This film is the only theatrical spin-off of the Ultraman Dyna TV series. Tiga and Dyna would later return in Ultraman Gaia: The Battle In Hyperspace.

Tropes related to kaijus and aliens in this movie is on the series' Character page.

Ultraman Gaia: The Battle in Hyperspace provides the following tropes.