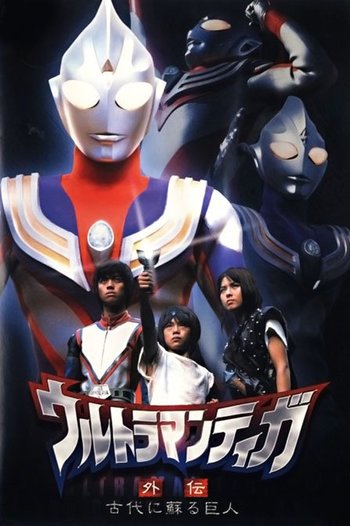 Wait a minute, what did you mean, this is a fantasy-adventure show?
Advertisement:

Ultraman Tiga Gaiden: Revival Of The Ancient Giant is a 2001 short film produced by Tsuburaya, part of the Ultra Series.

Five thousand years ago, an ancient red-and-blue warrior of light (known by the audience as Ultraman Tiga) defended a village against a giant, golem-like monster, but disappeared after that, where the Ultra is worshiped by superstitious locals as a guardian protector. In the present time of 2038, Super GUTS pilot Tsubasa Madoka (son of Daigo and Reina Madoka from Ultraman Tiga) pursues the monster Jomonoid, before suddenly getting dragged into a wormhole into the past. Upon his arrival, Tsubasa realized he's stuck a few centuries from the present, specifically, in the same village that Ultraman Tiga once guarded, and there are evil forces who wants to prevent the re-awakening of Ultraman Tiga while re-summoning monsters of the past...

Tropes related to characters in the special are documented on the series' main character pages.