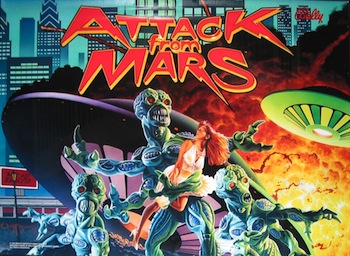 Earth will be ours!
"Reports are coming in from all over the world... The Earth is under attack! An attack... from Mars!"
Advertisement:

Attack from Mars is a pinball machine released in December of 1995 by Williams Electronics under the Bally label. It was designed by Brian Eddy and illustrated by Doug Watson.

Like most pinball games, there isn't really much in the way of plot: the Earth is under attack by Martians, and you must stop them from kidnapping women and destroying the world's monuments, before ultimately taking the fight to the source on Mars itself and a chance to Rule the Universe. The main draw of the machine is the Martian ship toy in the center of the board that actually shakes when the player destroys it in-game.

A digital version of the game was available as part of FarSight Studios' The Pinball Arcade collection until the WMS license expired on July 1, 2018. Another digital version is currently available for Pinball FX3, along with a remastered version that includes the typical Zen Studios flair.