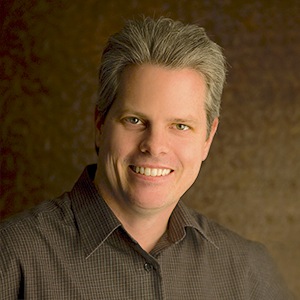 "Before working on Psi-Ops I spent 17 years working in the covert U.S. government Psi-Ops program officially know as Stargate (it's unclassified now so you can look it up). I was a remote viewing (RV) specialist and served in all the major wars and events of the last century. I was able to pinpoint enemy installations from thousands of miles away. After that I spent 12 years in a Tibetan temple learning the ways of the Lama Priests. It was there that I learned the story of Reiki and how to harness my Universal Life Force Energy. I then I spent 22 years working as a head fry cook at Burger Barn honing my life skills. Or maybe I just love to play games."
—From a 2004 interview
Advertisement:

As a child of The '70s, Brian grew up as a fan of both Video Games and Pinball. He developed his early programming skills by writing his first games in assembly language on the VIC-20 and the Commodore 64. After graduating from Macomb Community College in Milwaukee, he moved to Chicago, IL and joined Williams Electronics at the age of 21. He started as an effects programmer on Mousin' Around! and Bad Cats, then moved up to become a lead programmer for Pool Sharks, The Machine: Bride of Pin*Bot, Black Rose, and Indiana Jones: The Pinball Adventure.

By then, Brian felt that he had learned enough to move up to game design, to which Engineering chief Ken Fedesna agreed. Brian's first game was The Shadow, which he both designed and programmed; he admits that it was a learning experience that taught him about the need to include and exclude game elements for balance. He followed that up with Attack from Mars, Medieval Madness, and Arctic Thunder. After the closure of Williams' pinball division in 1999, Eddy moved to Midway Games, where he worked on Psi-Ops: The Mindgate Conspiracy and Mortal Kombat: Deception.

Today, Eddy is an executive at Spooky Cool Labs, a subdivision of Zynga that works on social casino gaming. He returned to the pinball industry as a Senior Game Designer for Stern at the tail end of The New '10s, with Stranger Things marking the first machine he designed in over 20 years.

Oh, he also really likes cows. All those hidden cows in pinball games started with him.

Games that Brian Eddy has worked on include: