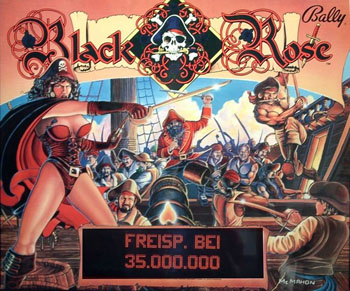 I'd avoid making any "seamen" jokes...tis a jolly good way to get yer cannonballs blasted off!
"I am Black Rose, queen of the high seas!"
— Black Rose, upon starting a new game
Advertisement:

Black Rose is a pinball machine created by John Trudeau and Brian Eddy, with artwork by Pat McMahon. It was released by Williams Electronics (under the "Bally" label) in 1992. Only 3,746 units were made, making it something of a rarity.

The game focuses on the title character, a female pirate captain who commands her crew of grizzled sea dogs. Your goal is to sink as many ships as you can by lighting S-I-N-K-S-H-I-P through various means, then fire a cannonball through the broadside at the far end of the table. Along the way, you'll find the Pirate's Cove, get a random award from Polly, and play no less than three Video Modes.

Possibly the most interesting feature of the game is its cannon, which sits below the playfield just above the flippers. At certain points, the cannon will become loaded and start pivoting back and forth. The player must then press the "Fire" button on the lockbar, causing the cannon to pop up and launch the pinball at various playfield targets for different bonuses. Accurate cannon-firing is needed to hit the broadside of opposing ships and establish your reign as Queen of the seas.

A digital version of this table is available for Williams Pinball Classics by Encore Inc. It was also available for The Pinball Arcade by FarSight Studios before their WMS license expired on July 1, 2018. Another version is currently available for Pinball FX3, along with a remastered version that includes the typical Zen Studios flair.