My Brain is Big 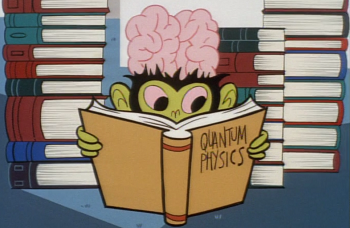 Azmuth: Are you inferring that you're smarter than me because your head is bigger?
Brainstorm: No, I'm implying that I'm smarter than you because my brain is bigger!
— Ben 10: Alien Force
Advertisement:

What's a fast way to clue the audience into a character's Super Intelligence, either inborn or suddenly-gained? Why, give them a swollen (and often hairless) cranium, apparently housing a grossly enlarged brain. Variants include the head being fissured like a human brain, or the enlarged brain being exposed. The head may or may not pulsate, sometimes more like a heart than a brain, and the rest of the body be comparatively weak and underdeveloped. Often related to Evolutionary Levels or dubious experiments done For Science! May involve the development of Psychic Powers if it's big enough.

This is also sometimes used as a generic "alien trait" and not a specific indicator of intelligence. The Greys are a prominent example.

While this may seem like Truth in Television, since animals with larger brains do tend to have a higher intellect than those with smaller cerebra, it turns out that intelligence is much more complicated than that (otherwise blue whales, with brains the size of fully-grown adult humans, would be the most intelligent species on the planet while African grey parrots, with brains the size of a walnut, wouldn't be anywhere near as intelligent as dolphins or chimpanzees). Turns out that intelligence is a function not so much of how large an organism's brain is, but how densely interconnected it is. The denser the brain tissue and the more neural pathways within an organism's brain, the higher its intellect. Obviously, however, a larger brain does have more room for such connections, but it's not as straightforward as this trope would have you believe.

See Also Forehead of Doom, which may be used to show this in a more realistic light. May sometimes overlap with Brain Monster if played for horror. No relation to Cranial Eruption.