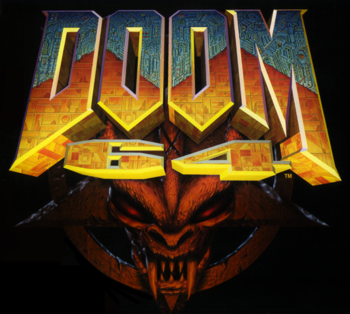 To Hell with you.
Advertisement:

Doom 64 is a 1997 First-Person Shooter in the Doom franchise, originally released for the Nintendo 64. Despite its name, it is not a direct-port of the original game, but instead a sequel with completely new levels, graphics, and sound design.

Taking place after the events of Doom II, the governments of Earth have decided to quarantine the demonic threat by bombarding all UAC facilities on Mars with a lethal amount of radiation. Years later, a stray satellite detects a powerful entity that has survived the fallout and is resurrecting legions of slaughtered demons to launch another invasion. To stop the invading hordes, the Doom Marine is called out of retirement to put an end to this new entity and rip his way through the forces of Hell one more time.

Contrast to the previous mainline installments of Doom, Doom 64 featured a darker atmosphere, forgoes the rockin' metal-inspired tunes in favor of haunting and unsettling ambiance, and adds an increased emphasis on puzzle-solving and exploration. The darker tone and style of music could be seen as a follow-up to the PlayStation ports of Doom and Final Doom as they share a similarly dark atmosphere and composer, along with reusing many of the sound effects from those ports. On a technical standpoint, Doom 64 was the first 3D-accelerated id Tech 1 engine game that featured effects such as fog rendering, an advanced lighting system, and animated skies among technical innovations for its time.

While Doom's first two entries saw ports to a plethora of consoles during the '90s and onward, Doom 64 remained exclusive to the Nintendo 64 for many years, and since Midway Games' dissolution in the late 2000s, it made obtaining the rights to the game difficult. There were efforts by Samuel "Kaiser" Villarreal to bring the game to PC with a Doom II total conversion titled Doom 64: Absolution, followed by an unofficial port using data from the Nintendo 64 cartridge with Doom 64 EX. Around 2020, Nightdive Studios and Bethesda were able to obtain the rights to Doom 64, and on March 20 of the same year, released an updated port of the game to PlayStation 4, Xbox One, Nintendo Switch, and PC through Steam and Bethesda.net to coincide with the release of DOOM Eternal; it was later released on GOG.com in 2022.