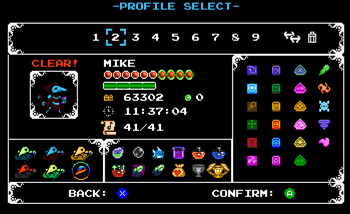 If the game's cleared, what's that empty space?
"Won't open, huh? I bet they didn't even put anything on the other side. Bah! Patch in the rest of the castle, you cowards!"
— Bowser, lampshading this trope on a locked door in Peach's Castle, Paper Mario: The Origami King
Advertisement:

So you have a game with lots of hidden areas, secret stashes of powerups, and generally all kinds of rewards for exploring and busting down walls. You're at the end of the game and have every powerup you've seen, but... why is there still an empty slot in your inventory? Does that bridge get fixed at all? Where is the ultimate upgrade for the laser gun? How do you get to that island in the distance?!

Turns out, it... doesn't exist. There isn't an item for every box in your inventory screen. That broken bridge was just there for flavor. Not every type of weapon has an ultimate variant. The island in the distance is just part of the skybox. There's no reason to be paranoid because of Interface Spoiler; the game just never tells you this, so you're left to wonder what you're missing out on.

This is often spawned from an Empty Room Psych or something that was Dummied Out, and often creates an Urban Legend of Zelda. For those into 100% Completion, this can end up as a form of Fake Longevity. Last Lousy Point is when it really is just that well hidden.

Can be considered a video game-specific Sub-Trope of Riddle for the Ages. See also Interface Spoiler for another video game meta-trope based on expectations, that often overlaps with this one, or would, if the thing it "spoiled" existed.