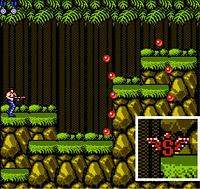 When you're fighting a group of Mooks, sometimes, a rocket launcher or a machine gun may not be be able to cut it, as the enemies are far too spread out.

The Solution? The Spread Shot!

The spread shot can come in three different flavours:

Initial Burst: The attack is fired out in a spread of bullets forward, usually in a uniform spread. This makes it easier to hit enemies spread out too far. Furthermore, these attacks can usually be shotgunned into a larger Mook, possibly causing more than three times the damage. If you are doing this with a bow, you are doing a Multishot. There's at least one real life weapon that does this - the Claymore Mine which throws projectiles downrange spread over a 45 degree arc.

Spray Burst: Only one bullet is fired out at a time, but in rapid succession. Unlike an ordinary machine gun, the shots are spread out a lot more.

Exploding Shot: The player fires out an initial shot. When it hits an enemy or a wall (or given enough time), a burst of shots come out and the initial projectile disappears. Recursive Ammo can be this.

Usually, this sort of attack can lead to a Game-Breaker weapon, especially in games where most of the mooks die in one hit, such as the Spread shot in the original Contra. In other cases, getting point-blank to the enemy and firing will result in very fast kills (though this is usually suicidal for the inexperienced). The problem arises in games where each individual shot is weak, and therefore, a point-blank shot may actually be the best option (which is the classic example of a Short-Range Shotgun).

See also Shotguns Are Just Better. Compare Pinball Projectile (a single shot that hits multiple targets), Multi-Directional Barrage (an attack that shoots all around you) and Improvised Scattershot (for when the attack wasn't designed to do this).

Examples of the Initial Burst:

Examples of the Spray Burst

Examples of the Exploding Shot:

Ludwig splits into three copies with the fakes firing two magic blasts at once and the real one firing three.

Ludwig splits into three copies with the fakes firing two magic blasts at once and the real one firing three.