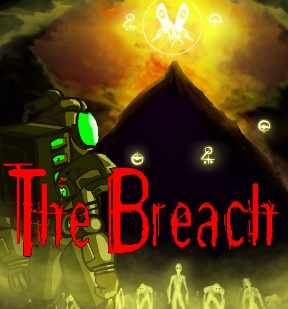 is a browser-based Adobe Flash game made by Berzerk Studio, famous for Homerun in Berzerk Land and Trap Master. It was first released on July 20th, 2010.

The story centers around Sergei, the head of security on a human spaceship, after he is sent over to investigate the suspicious silence of the Hermes, a starship fitted with a prototype SW-JUMP engine. The experimental hardware of the new engine has created a rift into an alternate dimension filled with giant yellow butterflies, mysterious goo and the colour yellow.

Sergei must now fight through a ship infested with zombies, mutated spiders, the aforementioned giant butterflies, horrific mutants and insanely mutated crew members; not to mention a few sojourns into the evil yellow mutant dimensions along the way.

This Flash game provides examples of: